You are here: Home / ChangingAging / Old Age in Ancient Rome

I am currently reading How Rome Fell which is an engaging and insightful book. The author argues that Rome fell, mostly, because its system of governance became increasingly inflexible and lost the ability to respond to the challenges that faced its gigantic empire.

Afganistan does not appear to have been a factor. 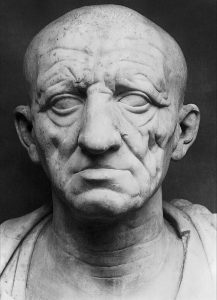 I went a googling and found a fascinating book by Tim Parkin. Old Age in Ancient Rome looks fascinating.

Here’s a quick take on it…

Classical authors such as Cicero and Plutarch would have us believe that the elderly were revered, active citizens of ancient Rome. But upon closer inspection, it appears that older people may not have enjoyed as respected or as powerful a place in Roman society as has been supposed.

In this highly original work, Tim Parkin considers the many issues related to aging and the aged in the classical Roman world. Drawing on both his expertise in demography and his knowledge of ancient history and literature, he coaxes new insights from a variety of sources, including legal documents on the “rules of age,” representations of old age in classical literature, epigraphic evidence from tombstones, Greco—Roman medical texts, and papyri from Roman Egypt. Analyzing such diverse sources, he offers valuable new views of old age — not only of men in public life but of men and women in marriage, sexual relationships, and the family.

Parkin detects a general lack of interest in old age per se in the early empire, which in itself may provide clues regarding the treatment of older people in the Roman world. Noting that privileges granted to the aged generally took the form of exemptions from duties rather than positive benefits, he argues that the elderly were granted no privileged status or ongoing social roles. At the same time they were both permitted — and expected — to continue to participate actively in society for as long as they were able. An innovative and ambitious work, Old Age in the Roman World paints a compelling, heretofore unseen picture of what it meant to grow old in antiquity. As a work of both social and cultural history, it broadens our knowledge of the ancient world and encourages us to reexamine our treatment of older people today.

I am looking forward to reading this but the summary excerpted above flags an especially important conflict.

Classical authors such as Cicero and Plutarch would have us believe that the elderly were revered, active citizens of ancient Rome.

Noting that privileges granted to the aged generally took the form of exemptions from duties rather than positive benefits, [Parkin] argues that the elderly were granted no privileged status or ongoing social roles.

The gap between the rhetoric that leading figures use to describe the value and honor of aging and the aged are almost always in conflict with the actual practice. This same is true today.

A leading figure on Capitol Hill (and possibly the next Speaker of the House) is a man who was, no doubt, taught to respect and value his elders. Here is a sample of his current thinking on Social Security.

ON BANNING OUTSIDE INCOME FOR SOCIAL SECURITY RECIPIENTS:

If you have substantial non-Social Security income while you are retired, why are we paying you at a time when we’re broke?

I think Social Security would be the most logical place to start. It’s just a matter of numbers.