You are here: Home / Barack Obama

It’s the investor equivalent of announcing: “If that guy wins, I’m moving to Canada.” According to a recent survey by insurer Allianz Life, about 40% of voters aged 55 to 65 say that they plan to change their portfolios depending on who wins the election. 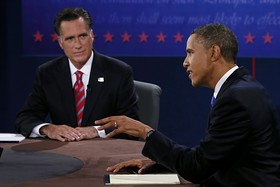 And as Encore contributor Catey Hill reports today, for most that change would mean reacting defensively in response to a win by the man they dislike. “Voters who identified themselves as Republicans or Democrats generally said they were likely to invest more conservatively if the opposing party won the White House,” she writes, adding that “many Republicans also said they would invest more aggressively if Mr. Romney won.”

Way, way back when you used to have to show up and actually watch candidates debate (think Lincoln-Douglas). Then it was radio, then TV. I remember listening to the Bush-Gore debates on the radio with my parents. That was just twelve years ago but you might not know it if you watched the debate the way I did.

Commentators weigh in on a claim by Mitt Romney

Middle-aged and older adults living in battleground or "swing states" represent 41.90 percent of the population in those states. So the 2012 presidential contest may swing on choices made by undecided Baby Boomers and older voters in just ten states. Battleground states include Colorado, Nevada, New Mexico, Iowa, Wisconsin, Ohio, Pennsylvania, New Hampshire, North Carolina and Florida. (This is a dynamic list and changes with voter polls, political gaffes and sometimes the wind.) Swing states are critical to the outcome…

The fate of many important health reforms aimed directly at seniors is in the hands of the Supreme Court.  While the public has focused most of its attention on whether the High Court will strike down the individual mandate in the 2010 health reform law, the justices today are hearing arguments about another critical issue: What should happen to the […]