You are here: Home / Embracing Elderhood / Winning the Sweepstakes (And Losing Your Savings)

Financial elder abuse is the fastest growing form of elder abuse in the country. As the population of senior citizens continues to rise, the need to protect the elderly from such exploitation grows every day. 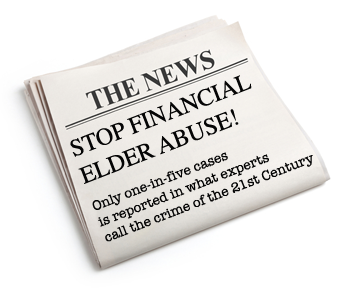 Between February and July of 2007, Patricia Candelaria, 83, sent nearly $200,000 to claim a sweepstakes check that she never got, according to Sid Kirchheimer’s column in a 2007 edition of the AARP Bulletin. A man calling himself David Sommers of the National Contest Association constantly called Ms. Candelaria with requests for wire transfers, requests with which she complied. He even sent her an “invoice” for $25,830 in past-due payments. Her adult children stepped in to curtail the fraud when they found out but she still believed that they were interfering in her personal business and stopping her from getting a windfall.

It would be comforting to know that state and federal law enforcement would have this and other common types of elder fraud high on their agendas, but they don’t. One of the most vulnerable segments of our society, one that has accumulated assets over a lifetime of working and earning, is not routinely singled out for study when the FTC or the Justice Department develops data on fraud in America. This is troubling. I asked Mr. Frank Dorman, a spokesman for the FTC, if any effort had been made to account for the known bias among those 65+ not to report financial fraud losses to authorities. His response? “I’m not aware of any effort to do that.” Yet, according to Debbie Deem of the FBI, of the thousands of telemarketing scams that she has investigated over the years, “I can only think of two (victims) who weren’t elderly.” Perhaps the FBI should be talking with the FTC about what data to collect and what biases to measure when it comes to fraud information.

Among the elderly, there are many types of fraud most often perpetrated by strangers: the “pigeon drop”, the fake check scam, bogus sweepstakes, phony product and service telemarketing, “pump and dump” or pyramid investment deals, unnecessary home or auto repair, the infamous Nigerian money transfer request, magazine subscription rip-offs, advanced fee loans against home equity or pensions, inappropriate annuity purchases with the proceeds of a reverse mortgage, identity theft through telephone or internet “phishing” contacts and the “sweetheart” or “sugar daddy” swindle. Whether these scams cost America’s elders $10 billion, $36 billion, $80 billion or even more each year is not actually known. The hard data are just not available. If and when we get around to developing an accurate national figure, it’s likely to shock.

For instance, in 2005 the Attorney General of Maine, Steven Rowe, indicated that the average reported loss among senior victims of financial fraud in his state that year was $39,000. Multiply this figure by the National Center on Elder Abuse’s estimate that 5 million seniors are financially scammed each year (although only 20% of those are estimated to actually report the loss) and the total cost to America’s seniors would be at least a whopping $195 billion. Shouldn’t we have better information about this topic given that the number of America’s seniors will jump from today’s 35 million to 72 million in the next 19 years thanks to the relatively healthy and wealthy Baby Boom?

“When two people meet to decide how to spend a third person’s money, fraud will result,” opined scientist Herman Gross. Financial abuse of the elderly by strangers likely pales in comparison to what vulnerable seniors lose to family members, professional advisors, caretakers and others whom they know and trust. The financial impact of abuse by family, friends and advisors will never be fully established because the elderly often don’t know that it has occurred and if they do know, they are frequently loathe to air the issue publicly. Experts suggest that the dollar value of financial fraud perpetrated by people who know their elderly victim is many times greater than fraud perpetrated by strangers.

The theft of tens of thousands of dollars from elderly victims is particularly harrowing because these seniors do not have a lifetime left to make up the loss through work and investment. They are thrown into a situation wherein the very thing that they worked and saved for— financial independence in their declining years—has been taken away. Elderly victims of financial fraud often sink into depression, are more likely to suffer rapid physical decline, accelerated cognitive degeneration, forced institutionalization and an earlier death.

“There is rarely aggressive prosecution of financial crimes against the elderly and the reasons are multiple,” says Jon Grow, Executive Director of the National Association of Bunco Investigators and former Baltimore detective.

“First, it’s hard to get seniors to admit that they have been fooled. They are ashamed and afraid that if anyone finds out that they will lose their independence or that they will get some family member into trouble. Second, these crimes are not at the top of the local prosecutor’s agenda because they are not headline-grabbing violent crimes, in fact they aren’t even in the same category as the high-profile white collar crimes because in some states they are handled as Civil Law matters. Third, if the scam originates offshore, local law enforcement has to rely on the Secret Service, the FBI or one of the other federal agencies. They do what they can but their priorities and budgets are limited.”

For telephone, mail and Internet scammers, Canada is the scammers’ residence of choice, based on sheer volume of activity. Why Canada? It is English speaking, has similar time zones, similar phone systems, they are trusted International neighbors, have relatively simple wire transfer procedures and most importantly, very lenient sentencing for those who eventually do get caught. Plus, according to Steve Baker, Director of the FTC’s Midwest office in Chicago, Canada is reluctant to extradite their cross-border fraud criminals to the U.S. because we might to toss them in jail and Canada doesn’t.

However, even in the U.S., getting significant jail time for elder fraud is unusual. A 37-year-old Georgia man was convicted in 2007 of bilking an 83-year-old widow out of $97,000 in a driveway resurfacing scam. This man, Jack Harrison, Jr., had been arrested 40 times in the prior 17 years and convicted 21 times, primarily for targeting older adults. Finally he got a three-year jail sentence. This would seem to be about 20 convictions too late.

The reluctance of seniors to come forward, the availability of substantial assets, the general lack of fully resourced investigations, the lukewarm enthusiasm for vigorous prosecution and the relatively modest sentencing guidelines for those found guilty are all to the benefit of those who have and will prey on the nation’s vulnerable elderly.

The bad guys see the aging of the Baby Boom as their own retirement plan: lots of old folks with lots of money and plenty of creative ways to separate the former from the latter. You may think, “Not me, I’m too smart to fall for such foolishness.” However, the current crop of elders would have said the same thing 20 years ago; but then age came along, took away some of their cognitive agility, brought loneliness to many of them, robbed some of their feeling of self-worth and independence–which a lottery windfall would help restore–and their lifetime of “smarts” was of little benefit. In fact, it often worked against them. The Baby Boom will be no different, just way bigger. The scammers will tweak old scams and make them new again.

Around the elder financial fraud issue the federal government is, at best, nibbling the edges. The Elder Justice Act, first introduced to the Congress in 2003 was finally signed into law as part of the Affordable Care Act (ACA). To date, however, the Congress has not appropriated any money to implement the program. And, if several of the Republican critics of the ACA have their way, the whole “Obama Care” legislative package will be reversed, including the Elder Justice Act.

Some people recommend that, similar to the way we forbid minors from entering into binding contractual agreements, we should require those over a certain age, say 72, to enlist the oversight of a younger adult in financial transactions to protect the elder from financial abuse. This concept is fraught with problems, not the least of which is push back from the elder cohort itself. Clearly, there are seniors who would benefit from such a requirement but there are millions who would never need such oversight and would view it as demeaning and/or insulting. What to do?

Here are some broad recommendations: