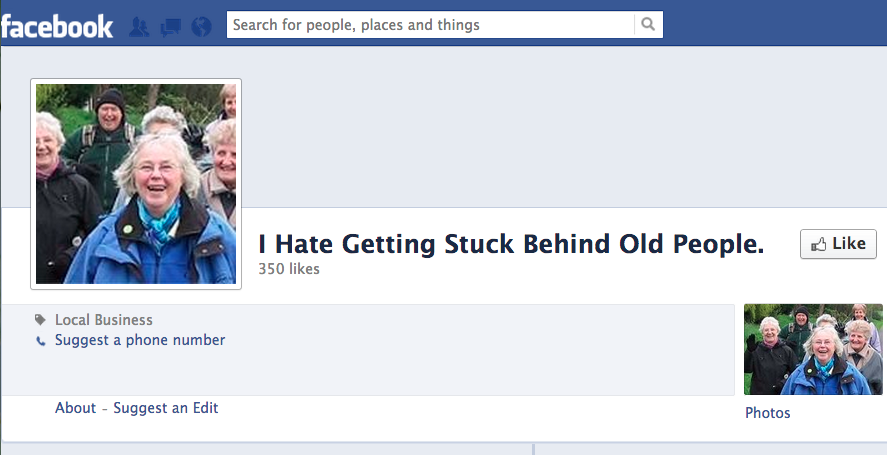 In my earliest interaction with Facebook in 2007, one of the first things I discovered were dozens of sites devoted to hating old people.

Back then, Crabby Old Lady noted a few examples of the hate speech she found:

sometimes i see old people in wheelchairs and i have a strong urge to push them down the stairs.

I like to beat the living crap out of old people

Let us unite and join for a common cause, abolish social security and legalize euthanasia.

Nothing has changed in the intervening eight years. Well-known and respected aging researcher, Professor Becca Levy of Yale University, with colleagues from three other colleges have published the first ever study of age stereotypes that appear on social networking sites – in this case, Facebook.

Here is an excerpt from the abstract of their report published by Oxford University Press (full report is behind a paid firewall):

”…we conducted a content analysis of each publicly accessible Facebook group that concentrated on older individuals. The site ‘Descriptions’ of the 84 groups, with a total of 25,489 members, were analyzed.

“The mean age category of the group creators was 20–29; all were younger than 60 years. Consistent with our hypothesis, the Descriptions of all but one of these groups focused on negative age stereotypes.

“Among these Descriptions, 74% excoriated older individuals, 27% infantilized them, and 37% advocated banning them from public activities, such as shopping. Facebook has the potential to break down barriers between generations; in practice, it may have erected new ones.”

No kidding. One charming little piece of ugly bigotry said anyone older that 69 should face a firing squad. Another, quoted in the Vancouver Sun, agreed:

”You haven’t got much going for you, so my advice is…take the bullet and enjoy your grave.”

I want us to consider what kind of media and advocacy storm would erupt of those statements were directed at blacks, Latinos, Asians, women, etc.

In its policies, Facebook forbids hate speech directed at race, ethnicity, national origin, religion, sex, gender, sexual orientation, disability and disease. Do you see anything missing from that list?

Huffington Post quoted a Facebook spokesperson responding to questions about the age-related hate speech on the social networking site:

”A Facebook spokesman said the company had not yet seen the research, but noted that as of February 2012, one-third (34 percent) of Internet users age 65 and older use social networking sites such as Facebook, and 18 percent do so on a typical day.

“The spokesman directed Huffington Post to a University of Arizona study that found using Facebook could improve the memory of people 65 and older as well as help them feel more socially connected.

Uh-huh. Does that mean Facebook thinks hate speech is good for old people?

Facebook spokesperson, Andrew Noyes, was just as oblivious when the Denver Post asked for comment saying that “statements of hate” are removed when they are reported and they violate the Facebook Statement of Rights and Responsibilities.

“We welcome meaningful research on how people connect and share on Facebook,” he continued, “but believe this study paints an incomplete picture of how more than a billion people use the platform.”

Apparently that means Facebook finds it acceptable for 25,000 of their billion members to spout hate-filled diatribes against one certain cohort of people but not those others listed in their policies. Researcher Levy reports that all the ageist Facebook sites they studied were open to the public and easily turned up in searches using common words related to age.

“Jane Barratt, secretary-general of the IFA, said it’s unacceptable that Facebook doesn’t protect seniors from such attacks in its Community Standards on hate speech…”

Hate speech is awful enough when it is aimed at any group at all. But when one group is singled out as an exception to prohibition against hate speech – and, in this case, corporate spokespersons support the exception – the corporation becomes the definition of bigotry.

Again, let me ask about the media storm there would be if, instead of old people exempt from Facebook’s hate-speech standards, it were women, gays, people with brown skin and so on.