You are here: Home / Disrupting Dementia / Neurocognitive Disorder is the New Dementia 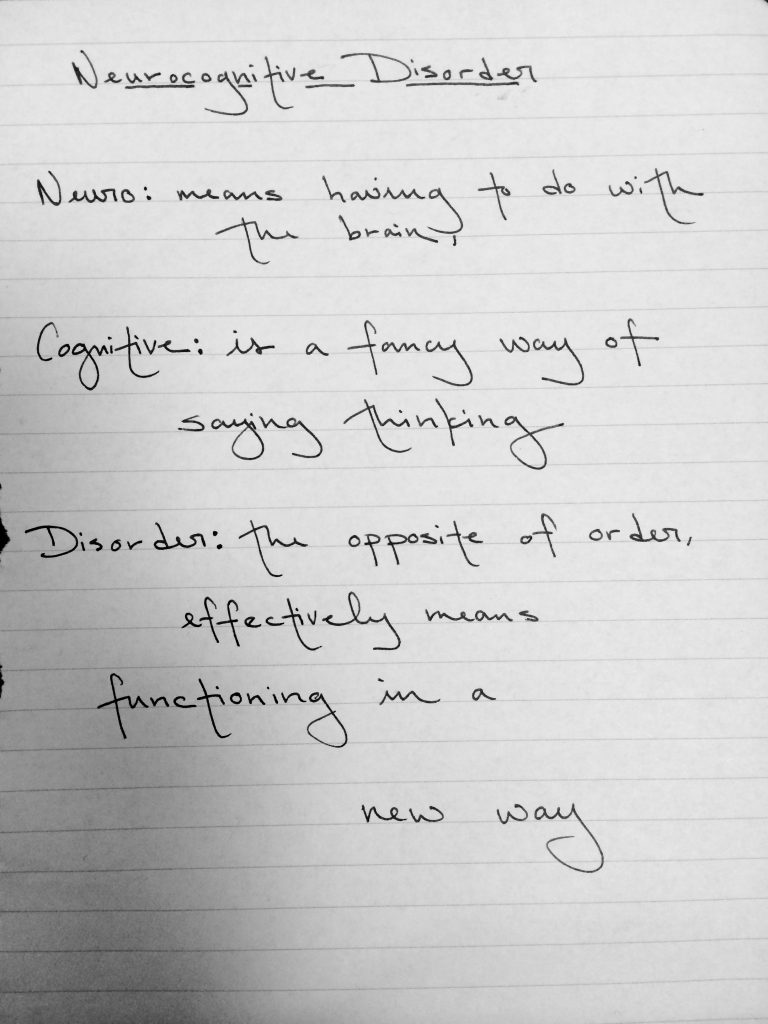 When I had to select a population to work with for my clinical psychotherapy training, I was drawn to elders because in contrast to other populations, I believed I would not be expected to ‘fix’ anyone. We cannot cure aging, right? (Wrong, but that is another story inspiring my thesis about America’s anti-aging myth.) I was lucky enough to find a training site that believed as I did—- a person is a person no matter what, an orientation called humanism.

Where I worked, the diagnosis I come across most often was that of dementia. The single greatest ‘risk factor’ for dementia is age, therefore, in working with elders, it is an often presented diagnosis. Like other aspects of aging (wrinkles, gray hair, etc.) dementia affects everyone differently. From a humanistic orientation, a perspective on dementia can be opened to where one can hold the medical realities of decline AND be curious about what else is present or may be emerging. It is from this humanistic perspective that I will explore a dementia diagnosis, offering a foundation in the medical model and expanding from there.

In the field of psychology, the handbook for diagnosis is called the DSM (Diagnostics and Statistics Manual). The most recent permutation of this tome was released recently. While dementia is still considered an acceptable term because of its prevalence in common language, the diagnosis clinically now falls under a category called Neurocognitive Disorder (NCD), with types ranging from Alzheimer’s to traumatic brain injuries. See Dr. Al Powers’ post for the pros and cons of this change.  A name can be a powerful thing and I still struggle with knowing the best term for this phenomenon. What is the most empowering and respectful? For communication sake, I currently oscillate between the clinical NCD and the colloquial dementia.

The basis for giving someone a neurocognitive disorder diagnosis amounts to determining that their brain works differently than most in at least two ways. Cognition, or thinking, is the easiest part of the dementia experience to measure. Eminent dementia researcher and practitioner Tom Kitwood (1995) in his article Positive long term changes in dementia: Some preliminary observations explained:

The culture of the western world has itself tended to set a high premium upon cognition; its established system of education, for example, is designed to differentiate people on the basis of their cognitive performance, while neglecting the sensibilities. It is also the case that in dementia the changes that occur in cognitive function (especially short-term memory) are relatively simple to measure, and these have provided a legitimate basis both for assessment and for drug trials.

When a diagnosis of NCD or dementia is given it is most likely that it is based on these easy to measure cognitive differences. But there is a lot more to the picture. There is a unique person who is experiencing changes physically, spiritually and cognitively. There are people who care deeply about them and are with them on this journey. Can we remain open and curious about these changes? Many argue the value of children should not be based solely on their test scores nor, I argue, should the value of elders.

For more on this perspective on dementia come see The ChangingAging Tour’s show Disrupt Dementia.