You are here: Home / ChangingAging / Final Push Needed For ‘Alive Inside’ 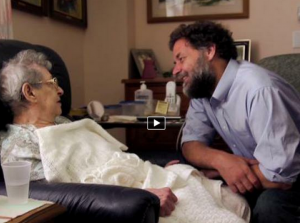 As many readers know, I’ve had the pleasure of working with documentary film director Michael Rossato-Bennett on a groundbreaking documentary film ‘Alive Inside‘: A Story of Music & Memory. ‘Alive Inside‘ is the story of Dan Cohen, a small town social worker who discovers how personalized music can “awaken” and regenerate deeply locked memories in patients with dementia and Alzheimer’s. I’m honored to be featured in the film along with my good friend Al Power and several Elders at St. John’s Home in Rochester.  It is a truly moving documentary that captures strength of the human mind and spirit and has moved every one of its pre-release audiences to tears.

Michael sent me an urgent appeal today and we need your help to complete the film. ‘Alive Inside’ is being financed through a Kickstarter campaign and Michael has come within just a few thousand dollars of his $50K goal. But here’s the deal — if he doesn’t reach the goal in the next three days, he loses all the money that has been pledged. We can’t let that happen.

I’m especially asking those with Elders in their life to consider donating to this film — take a look at the campaign page for truly awesome rewards Michael is offering for donations  http://www.kickstarter.com/projects/1406732546/alive-inside-a-story-of-music-and-memory?ref=live. You can even honor your Elder in the credits of the film.

Alive Inside‘ shows us that through music we have the power to help millions of people awaken to who they are and what they can be. We can help the old and the aging sustain their humanity, and by helping share this message with the world, inevitably, we’ll prove our own.