You are here: Home / Blogstream / The Power of Stories: Listening to Our Patients 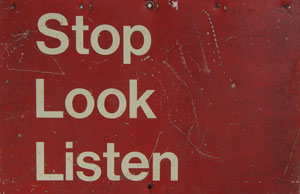 “I realized how hard it is to hear a quiet patient’s voice when we are surrounded by such a cacophony of sounds:  …the need to keep up with the most advanced surgical technology, the surgical suite manager’s praise and admiration when I book a heavy load of cases, the practice management consultants’ chirpy remarks about the need to view patients as revenue sources…A frail, dying, elderly widow’s voice becomes so hard to hear against all the noises of contemporary private practice.”  (James Rickert, MD in Quiet Caring)

This quote is from one of a series of wonderful and moving case stories recently published by the Archives of Internal Medicine.   These stories show how we have lost our way in medicine.  We have more technology available than ever before, but we often fail to use technology wisely, using it in ways that do more harm than good to our patients.    Through the cacophony of all this technology, the voice of the patient and their real needs may be lost.  But these stories also show us that if we really listen, we can bring compassion and true caring back to medicine.
I’ll briefly note the highlights and key lesson from each of these stories, but GeriPal readers may be better served by ignoring the feeble words below and reading the stories on the Archives website.  The stories are very short, and some of the best medical reading you will do in a while.
In “Quiet Caring” orthopedic surgeon James Rickert recounts the story of a fellow patient he met while he himself was a patient on an oncology unit.  She was an older woman with metastatic ovarian cancer who had a wrist fracture, one of the most common fractures in older people.  She was told she needed surgery.  She was exhausted at the thought of needing an operation.  She knew her time was short, and wanted to spend her time in peace at home–not recovering from surgery.
A few days after Dr. Rickert had returned to work, he was surprised to find the patient in his examining room seeking a second opinion.  He noted that she had “just the sort of fracture in which surgery could make the radiographs look better, but there was utterly no evidence” that surgery would improve symptoms or function.  When he told the patient she would do fine with casting and no surgery, her eyes filled with tears of joy.  She died five weeks later, with her last month spared from surgery that would not help her.
In “Pain as a cause of agitated delirium” Geriatrician and Palliative Medicine pioneer Dr. Diane Meier tells the story of a hospitalized 85 year old woman in agony.  After a catastrophic episode of urosepsis (a urine infection that seeds the blood), she developed one problem after another, including multiple pressure ulcers.  Her son answered yes when asked if he wanted the providers to “do everything.”
When her nurses tried to do the twice daily dressing changes, she would scream and moan in pain, trying to strike the nurses as they did the changes.  Her attending did not order preprocedure opiods out of fear that they would worsen her delirium.  This is an unfortunately common error made by compassionate and well meaning providers.  Delirium is not a justification for withholding medicines for pain.  Untreated pain is actually a common cause of delirium.
After 63 days in the hospital, the nurse manager insisted on a palliative care consult.  The palliative care team spent extensive time clarifying goals of care and initiated low dose morpine to manage the patient’s pain.  Within a day, her mental status improved to the point where she recognized and interacted with her family.  Within 2 days, she was discharged back to her nursing home, where her family reported she was more comfortable and interactive than in months.  After her death, the family wrote the hospital CEO to thank palliative care team for bringing comfort to her last months of life.
In “My Mother the Gardener” Irene Wielawski reveals how she needed to protect her mother from a well meaning provider who wanted to give her mother “state of the art” care but “lost sight of the person he was treating.”
Ms. Wielawski’s fiercely independent mother was growing frailer from a host of problems including cognitive impairment.  When she developed atrial fibrillation, her doctor wanted to start her on warfarin, which is clearly evidence based therapy for this condition.  The problem is that the activity which gave the Wielawski’s mother the most joy was gardening.   Ms. Wielawaski was constantly treating her mother for scratches and occasionally cleaning bloody nicks from the gardening equipment.  Warfarin increases the risk for bleeding, and would render gardening unsafe.  Her mother’s doctor suggested lifestyle change.  Mrs. Wielawski declined and opted to treat her mother with aspirin.
Ms. Wielakski notes that she was glad she was able to help her Mom get the care she needed rather than guideline based standard care.  But she wishes she had more help.  She notes these are hard calls for clinicians, but they are even harder, “when you are on your own trying to do right by a loved one.”
In Palliative Care and Quality of Life, Rebecca Kirch of the American Cancer Society presents two hypothetical case vignettes contrasting the last months of life of the same individual with end stage cancer with and out palliative care.   While the cancer leads to death in both cases, in the vignette without palliative care, the family is left angry and bitter.   With palliative care, the family is satisfied that all was done to make the patients last months valuable and meaningful.  The vignettes make a compelling argument for why palliative care needs to be incorporated throughout the course of cancer treatment.  There is no reason a cancer patient can not receive both traditional chemotherapy and palliative care at the same time.
Too many people think palliative care is about death.  Wrong.  Palliative care is about life.
For a great summation, read the commentary by our colleague and palliative care physician Steve Pantilat.  He issues a compelling call for the better incorporation of palliative care and person centered care in medicine.
by: Ken Covinsky