You are here: Home / Culture Change / The New Dementia Story 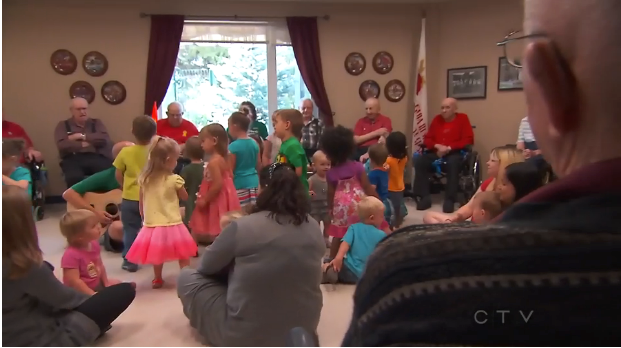 Last week I watched a news report out of Canada that told a different type of story about Alzheimer’s and dementia. It told the kind of dementia story you almost never see in primetime news — a joyful story.

Of course, it wasn’t all happy news. The piece I watched was the 4th part of an investigative report launched after a horrible murder committed by a nursing home resident living with dementia. Parts one-to-three of “Deadly Care” by Canada’s leading news station CTV W5 are hard to watch, uncovering widespread violence, abuse and neglect, full of in-your-face gotcha reporting and hidden cameras.

However, in the course of reporting this exposé, the news team heard about a place that was different. They heard about a model of care that was being practiced in which individuals living with advanced forms of dementia were thriving and living meaningful lives. The model of care was called The Eden Alternative and the place was Sherbrooke Community Centre in Saskatoon, Saskatchewan.

So this hardened news team that had just exposed dozens of horrible abuses and murders went to Sherbrooke ready to shine the spotlight on this so-called culture change philosophy called The Eden Alternative.

What they found astounded them — watch the video to see for yourself.

But what’s happening at Sherbrooke isn’t an outlier. The person-centered culture change movement is global, and The Eden Alternative is just one of many philosophies and community-based movements transforming the way we think about things like dementia.

For too long the dementia story we’ve been told again and again is one of shame, decline, isolation, loss of meaning, and loss of identity. That is the old dementia story.

There is a new dementia story being told. It’s being told in nursing homes like Sherbrooke who embrace person-centered culture change. It’s being told by people living with dementia, like Dr. Richard Taylor and millions of others. And now it’s even being told in art galleries, films, cafes and entire cities.

The effort to rebrand dementia and Alzheimer’s is well underway and I invite all our readers to be a part of it. I am actively participating in several local initiatives in Seattle to tell a new dementia story and I will be sharing these efforts on ChangingAging soon.

Join us and stay tuned!