You are here: Home / Culture Change / It’s Time To “hiv” the Talk With Older Adults 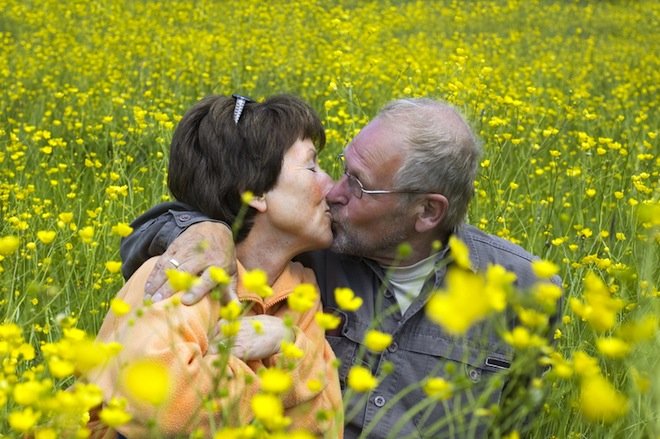 The face of contemporary American sexuality reflects the advocacy of millions of boomers who— in between lounging on Yasgur’s farm and fawning over a young, tight-pantsed Roger Daltrey—revolutionized conceptions of sexual stigma, reproductive rights, and contraception.

But for older adults, it’s time for a new sexual revolution—and one where a real conversation about HIV/AIDS can start.

Earlier this year, the CDC published startling findings from the HIV Surveillance Supplemental Report examining diagnoses of HIV infection among adults 50 years and older between 2007 and 2010 in the United States. Among those states with confidential name-based HIV infection reporting, there was a 14.3% increase in the estimated percentage of persons aged 50 years or older with diagnosed HIV infection—from 28.6% in 2007 to 32.7% in 2009. Of those adults diagnosed with HIV in 2009, 41.5% were classified as stage 3, with a T helper cell count low enough for AIDS—the severest form of HIV.

The reasons behind these data are complex and multidimensional. With the rise of penicillin successfully treating STDs like syphilis in an environment of recreational drug use and sex, boomers’ historical perspective could be skewing their identification with risky sexual behavior. The proliferation of pro-erection medication has fostered a renewed sense of sexuality for men and couples far beyond women’s childbearing years, thereby reducing the perceived functional necessity for protection among sexually active older adults. To complicate matters, the earliest symptoms of HIV infection like fatigue, malaise, and loss of energy can be mistaken for the ‘simple realities’ of aging and are often dismissed, if not ignored altogether.

Ageism and stigma can help explain why. As a culture, we believe aging precludes sexuality. It is easier and significantly more comfortable for us to imagine aging boomers as asexual, heterosexual, or at best, monogamous. And in the history of America—perhaps the world—few diseases have been as notoriously stereotyped; so even in cases of suspected and potential infection, the historically shameful subtext of HIV/AIDS creates silence among older adults. Only, that silence can be fatal.

Unlike their younger counterparts who account for the highest rate of HIV infection, adults 50 and over continue to go unscreened for HIV/AIDS even though its severity is disproportionately concentrated among boomers and safe, valid testing resources exist. Earlier and regular screenings across health domains can predict better, more manageable health outcomes when it comes to cancer, depression, or heart disease—and HIV/AIDS is no different.

As America grays, life expectancy increases, drug therapies improve, and functional cures grow in their promise, there is a substantive pragmatism—and responsibility—to screen older adults for HIV/AIDS. Emerging treatments will only be as effective as the populations they reach. For aging boomers, opt-out HIV/AIDS screening could serve as a simple, effective mode of sociocultural and medical enfranchisement in an environment that currently sanctions, minimizes, and dismisses their sexuality and health. It can also save lives.

So dearest baby boomers, blast some Power to the people, do what you do best, and fight for your right to love safely and without shame—again.