You are here: Home / Blogstream / On Behalf of ChangingAging, Thanks For A Wonderful Year

As we say goodbye to 2011 and look forward to the New Year I want to thank the ChangingAging Blogstream community for a wonderful year. Without your enthusiasm and commitment to changing aging we never could have built the Blogstream network and brought together this great community of voices.

On this New Year’s Eve I want to wish everyone the absolute best for 2012. I’d also like to share some of my favorite highlights from working with Dr. Bill Thomas and the ChangingAging community in 2011. Here’s a look a back:

It was just a year ago that we came up with the idea of creating a multi-blog platform to help pro-aging advocates setup a blog and contribute their feed of stories, ideas and updates into a single “Blogstream” of content. Taking advantage of the awesome free WordPress multi-site functionality, we redesigned ChangingAging.org and officially launched the Blogstream in May 2011. We now have over a 100 contributors and growing! Here’s the welcome message from Dr. Bill:

TEDxSF — Elderhood Rising: The Dawn of a New World Age

No question attending TEDx in San Francisco to see Dr. Bill give his Elderhood Rising TEDx talk was one of the highlights of my year. If you haven’t seen the video, it says it all:

The Green House Project Grows Up

Publication of the novel “Tribes of Eden” by William H. Thomas (aka Dr. Bill Thomas)

Of all the projects I worked on in 2011, overseeing publication of the novel “Tribes of Eden” was the most challenging and exhilarating. I’m still mesmerized every time I look at the cover art designed by ChangingAging’s graphic artist, Jonas LaRance. And make sure you visit the official book website we designed at www.TribesofEden.com. You can signup for exclusive updates and check out the latest news — launching the eBook was only the first step in an exciting journey. We’re hard at work preparing the paperback for publication this spring and a limited edition hardback collector’s copy for true Eden Underground fans.

2011 was a very busy year for ChangingAging’s web design team — myself and WordPress developer Jay Wesler. Besides building ChangingAging.org, we setup WordPress blogs for The Green House Project and The Eden Alternative. I’m excited to give you a sneak peek at our latest web project, a new website and blog for the nonprofit Sunrise Communities, which is a fantastic organization that provides services to people with intellectual and physical disabilities up and down the East Coast. Sunrise was a pioneering organization that helped deinstitutionalize state mental hospitals starting in the 1980s and has dramatically improved services for those with disabilities. Sunrise is now becoming active in the culture change movement in long term care and working to develop the first Green House Project homes for adults with intellectual disabilities. We just completed a test site for their new design last week and plan to go live in January: 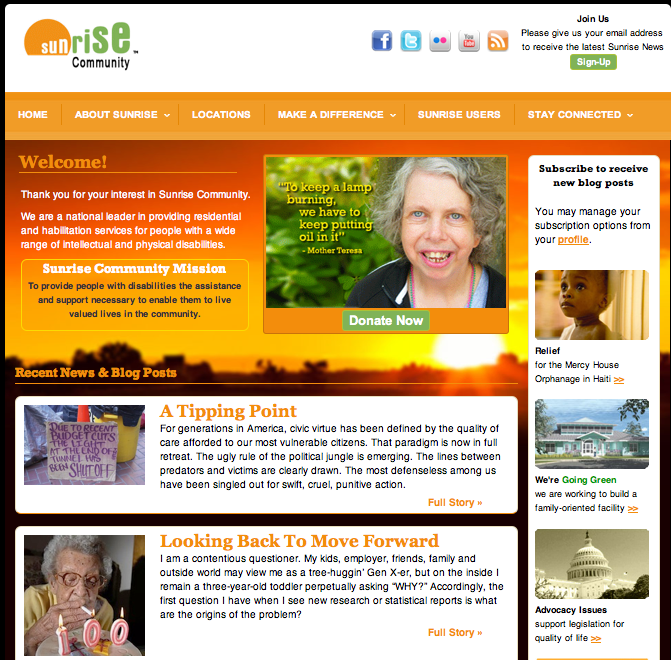 Another fun moment in 2011 came when famed anti-aging guru Aubrey de Grey stopped by Baltimore to offer his spiel on how medical science is mere decades away from a miraculous breakthrough that maybe (I believe he laid the odds at 50-50) will extend human life an additional 20 or 30 years. An underwhelming prediction, full of caveats, but in de Grey’s opinion close enough to immortality that he can almost taste it. The crowd was almost more interesting to talk to than de Grey (as I explain in my blog post here) but I enjoyed meeting the man in person. And true to form, de Grey happily joined a group of strangers in a round of beers after his speech despite being horribly jet-lagged after a flight across the Atlantic.

This list just barely scratches the surface of all the exciting projects I worked on in 2011. As you can see, I’ve been so busy that didn’t get around to compiling this until Saturday afternoon on News Years Eve! But I’d love to hear about our readers favorite changing aging moments in 2011 and your hopes for 2012.