You are here: Home / Aging Literacy / Can Death Be Different? 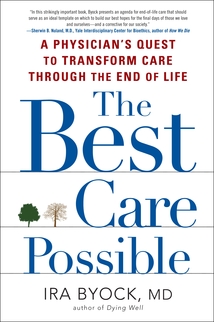 The Atlantic Monthly’s March issue features a stirring book excerpt from one of the pioneers of the Hospice movement Dr. Ira Byock calling for a transformation of how our society and culture think about and care for people who are dying.

In his book “The Best Care Possible,” (released March 15) Byock points to a mainstream culture that utterly refuses to come to terms with the facts of mortality. When confronted with terminal illness most people assume the worst thing that can happen is death. Byock rightly points out that there are much worse things that can happen  — namely, to die badly and suffer needlessly.

“Dying is hard, but it does not have to be this hard,” writes Byock, Director of Palliative Medicine, Dartmouth-Hitchcock Medical Center. Unfortunately, many medical advances that prolong life come at a harsh cost. The vast majority of people die having spent their final weeks and days in medical settings such as nursing homes or hospitals, sedated, restrained and isolated from loved ones:

At present, just over one-fifth of Americans are at home when they die. Instead, over 30 percent die in nursing homes, where, according to opinion polls, virtually no one says they want to be. Hospitals remain the site of over 50 percent of deaths in most parts of the country, and nearly 40 percent of people who die in a hospital spend their last days in an ICU (intensive care unit), where they will likely be sedated or have their arms tied down so they will not pull out breathing tubes, intravenous lines, or catheters.

I don’t have to tell culture change advocates that end of life care is not what it should be right now. The vast majority of nursing homes, hospitals and other long term care settings do not practice patient-centered care and instead prioritize institutional needs and profits over the needs of people. But Byock ends his excerpt with a stark warning — as difficult as things are now, they are about to get much worse:

How we die is already a public health crisis, and care for people through the end of life is poised to become a generation-long social catastrophe. Within the next few years, a demographic tidal wave of aging and chronically ill Americans will overwhelm our already stressed systems. As a nation, time is fleeting to avert a full-blown disaster.

With 75 million baby boomers on the cusp of retirement and only years away from needing end-of-life care, there are good reasons to worry. How can we improve an already broken system while it is being stressed beyond capacity?
The future of end-of-life care — our future, Byock points out — is in our hands. What can we do to change it?
H/T to my wife for catching this article.
[Disclosure: I haven’t spoken to Dr. Byock in years but I’m good friends with his daughters and for a time in high school his house was like a second home to me. Good luck with your book Ira!]