You are here: Home / Blogstream / BUCKMINSTER FULLER AND THE KEY OF LIFE.

BUCKMINSTER FULLER AND THE KEY OF LIFE. He is one of the 20th century’s great and certainly most prolific inventors. You might even say Buckminster Fuller (1895-1983) invented the big idea. According to Wikipedia and other sources, his professions and titles include inventor, theorist, architect, engineer, author, professor, designer, philosopher, futurist and his preferred “property of the universe.” He was a pioneer in global thinking, exploring principles of renewable and efficient energy, sustainability and human survival.

Most of his life’s work concentrated on designs for practical shelter and transportation. He is credited with popularizing the geodesic dome, the affordably produced lattice-shell structure used for residential and commercial buildings and military installations in the mid-20th century. 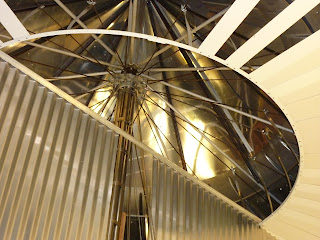 Similar in concept, his round Dymaxion House, popularized post WWII, was a showcase for energy efficiency and affordable construction. The then-ultra-modern design included features like revolving dresser drawers, a fine-mist shower to conserve water, and a rotating device in the ceiling (photo) to create natural winds for cooling and circulation. A model is now on permanent display at the Henry Ford Museum in Dearborn, Michigan.
Sort of a modern-day Da Vinci, Fuller also was fascinated with transportation. In the 1930s, he designed and built the Dymaxion, an 18-foot-long concept car that he used to encourage a form of transportation that could be safer, more aerodynamic, and conserve fuel (It got 30 miles to the gallon and seated 11).
Fuller considered himself an independent thinker and committed to searching for the principles governing the universe and determining how to use them to help advance the evolution of humanity. In his book, Operating Manual for Spaceship Earth, chapter one “comprehensive propensities” begins with one this profound observation:
I am enthusiastic over humanity’s extraordinary and sometimes very timely ingenuities. If you are in a shipwreck and all the boats are gone, a piano top buoyant enough to keep you afloat that comes along makes a fortuitous life preserver. But this is not to say that the best way to design a life preserver is in the form of a piano top. I think that we are clinging to a great many piano tops in accepting yesterday’s contrivings as constituting the only means for solving a given problem.