You are here: Home / Blogstream / A Green House Project In My Backyard 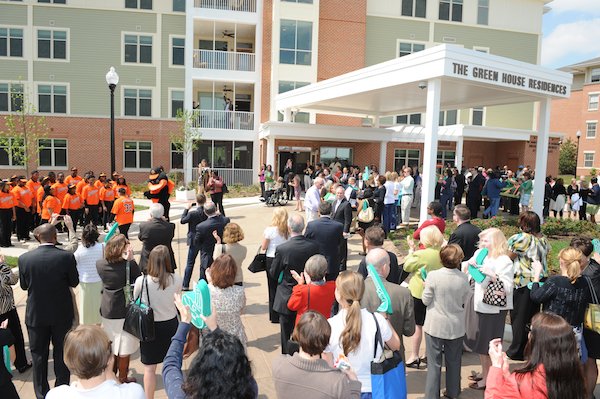 The grand opening of The Green House Residences at Stadium Place in Baltimore yesterday was a thrilling experience for me on a very personal level.

It was celebrated in great style with homage to Baltimore’s Memorial Stadium, former home to the Colts and Orioles. Complete with hotdogs, peanuts and a stirring performance of the national anthem and “Take Me Out to the Ballgame” by Baltimore City College’s award-winning choir, followed by a ceremonial “first pitch” thrown by Mrs. Shirley Dickens, Stadium Place’s first official resident. 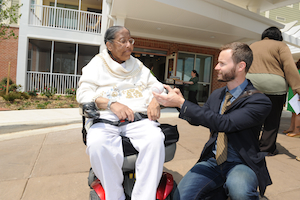 Kavan brings Mrs. Shirley the baseball for the "first pitch"

Out of the more than 100 Green House Projects to open across the country, this project is arguably the closest to realizing Dr. Bill Thomas’ core vision of allowing elders to live dignified, meaningful lives within their communities no matter their age, frailty or income. Sixty percent of residents at Stadium Place will be Medicaid eligible, which means the lower-income folks that GEDCO, the nonprofit who developed Stadium Place, is dedicated to serving can age right within their community. I’m excited about this because, coincidentally, Stadium Place is also my community.

Located on the grounds of Baltimore’s old Memorial Stadium, Stadium Place was built and thrives right in the heart of the community its elders come from. It is integrated into a larger mixed-income urban retirement community that currently includes four apartment buildings for low and moderate-income seniors, a YMCA facility, Memorial Field at the Y, ThanksGiving Place and a community-built playground. It’s a wonderful neighborhood with amazing views of the skyline and harbor from the upper story apartments, not far from Johns Hopkins University and downtown Baltimore.

I’ve lived in this neighborhood for nearly six years and when I first started working with Dr. Bill (about that many years ago) I was thrilled to learn that Stadium Place had the potential to be Maryland’s first Green House Project. As GEDCO Executive Director Mitch Posner will tell you, it’s been a long, hard, uphill struggle, which makes it all the more gratifying to see the vision come to life. 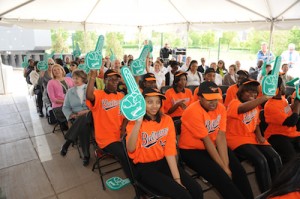 The Green House Project model is designed and has been proven to be a financially viable alternative to traditional large-scale nursing homes. But the initial capital investment required is significant, especially for a non-profit organization such as GEDCO. Mitch and the team at GEDCO spent years gaining the support and financial backing from the City of Baltimore, Maryland’s governor and state assembly, the Baltimore-based  Harry and Jeanette Weinberg Foundation and many private donors. It is a true testament to their  perseverance and dedication to under-served populations that GEDCO was able to raise the more than $12 million to build the Green House Residences at Stadium Place.

GEDCO is also the first organization in the nation to take advantage of special financing for Green House projects aimed at low-income elders under a joint initiative of the Robert Wood Johnson Foundation and NCB Capital Impact. RWJF and NCB already can claim credit for revolutionizing the nursing home industry by supporting Dr. Bill’s vision of The Green House Project. Now, they’ve made an incredible $100 million commitment to improving health and living conditions for those who need it the most. 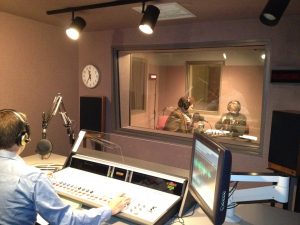 Yesterday, I had the pleasure of accompanying Dr. Bill to Baltimore’s NPR station to record an interview that aired today on WYPR 88.1 FM’s Maryland Morning with Sheilah Kast. The urgent need to provide long term care to underserved populations was highlighted in this interview, which was joined by Brown University assistant professor Zhanlian Feng, who has led ground-breaking research about the changing ethnic and racial make-up of nursing home residents. Zhanlian is currently working on groundbreaking research into the recent explosion of nursing homes and other lont-term care facilities in China and has kindly offered to share some insights to his work in a guest-post on ChangingAging, so stay tuned.

The Baltimore Sun also covered the Stadium Place grand opening with a great story about Mrs. Shirley and background on the project.  A couple TV stations showed up to film the festivities and WBAL Channel 11 broadcast this excellent story featuring Stadium Place’s administrator Nate Sweeney (a proud Erickson School alum!), Mitch Posner and others. A blogger from Kaiser news also attended the gala and wrote a great post touting the research proving The Green House Project model. 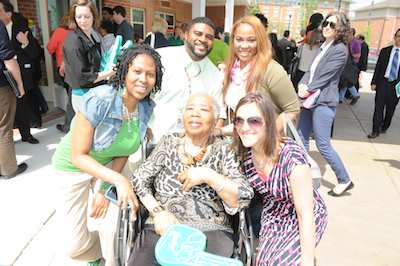