You are here: Home / Ageism / Review — This Chair Rocks: A Manifesto Against Ageism 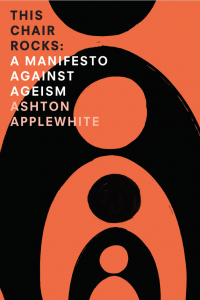 “A mass murderer had his hands wrapped around my throat, and I had my hands wrapped around his. We were choking each other. We looked at each other, and I was mortified to see that he had my face.” This was my dream, but it is also what reading Ashton Applewhite’s book, This Chair Rocks, brought to consciousness for me. I am the one who propagates the virulent and de-humanizing effects of ageism.

She offers no recrimination, blaming capitalist greed and the influences of powerful interests, but I know (from reading her book) that I am an agent of those forces. She paints the picture of this socially sanctioned prejudice with a deft hand, making this tendency sympathetic and widespread, but she also makes it clear that a kind of lynching is taking place. Her book is a wake-up call, especially for those who have the urge to make a difference while here, alive, and with the heart for change.

I remember when Michael Jackson joined up with Lionel Ritchie to write We Are the World in response to a killing famine in Africa, it had a refrain that captures the significance of Ashton’s book, “we’re saving our own lives.” This Chair Rocks makes it explicit that we all are aging, but we all are not all “olders-in-training.” We are not all engaged in saving our own lives. As an older (68) I am impressed by the fact she’s taken on such a painful and pervasive topic, and touched that this form of caring remains in the world.

She captures this invisible prejudice well. Writing in a compassionate and playful way about a scourge that affects us all. She points out what amounts to an extremely debilitating STD, a socially transmitted disease. The only real protection that preserves dignity and life is consciousness. That is what Ashton’s book promotes by its existence and what she underscores in her recommendations, for battling this unconscious prejudice. She makes ageism visible, a valuable contribution in itself, but then goes on to describe ways of limiting it. Consciousness-raising isn’t just a feminist good idea, it is a life saving practice. This book is a life preserver.

No attempt to save anything is going to succeed if our oldest, most veteran, exemplars are dissed. Ashton recognizes the importance of preserving our heritage, life experience intelligence, and humanity. She has the wit to make looking the mass murderers that exist in our interactions in the eye. For the freedom such a service reveals I have only my gratitude to offer. Thank you! Now let’s use this opportunity to make a difference!

Ashton is an activist, and remarkably she avoids the use of the word they throughout her book. There is no power-grubbing 1%. By taking this tack she preserves the chance we all have of saving our own lives. This is the task old people are confronted with. By avoiding scapegoating anyone, she increases our awareness, that like it or not, we are all olders-in-training. Now, the only question is, what are we training for? What are we preparing for —  is it freedom, or more prejudice? Ashton’s book makes that choice a possibility.