Expanding the number of older adults served, creating a mentoring program for younger residents, and relocating to a more walkable-friendly building are just some of the accomplishments under Erica Girgenti’s belt as director of the Adams (Mass.) Council on Aging. Having been on the job six years now, Girgenti has proven her worth several times over, according to her colleagues.

“Erica has energized the whole program,” says Pam St. John, the Council’s president. “She has a proclivity for action and she’s dynamic.” 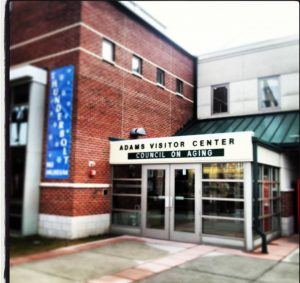 At first, Girgenti’s presence wasn’t so eagerly embraced. Her appointment was met with some skepticism because of her age. Yes, her age. Not because she is older, but because she is younger—a millennial, in fact.
At 33, this means that Girgenti began the job at the tender age of 27. “I was asked on a couple of occasions, ‘what do you know about running a senior center?’ and my reply was ‘give me some time and I hope that I can show you.’”

Show them, she did. Under Girgenti’s leadership, the Council has quadrupled the number of older adults served and created new programs designed to engage seniors and younger adults alike. She also works to eliminate ageism—of all kinds—in her community.

St. John says she had heard that there was some skepticism about Girgenti’s age. “Although a lot of people thought it was good idea, some seniors expressed concern that [Girgenti] may not know a lot about our problems and issues,” says St. John. “Well, she put that to rest pretty quickly.”

Personally, Girgenti says she is trying fight the stereotype that all young adults are living inside their social media and interested only in serving children and young adults. She recounts a story from Bill Thomas’ recent stop in Pittsfield, Mass., for his Age of Disruption tour: “Dr. Thomas asked us to think of a wish and what we want see in our community, and the topic of our youth are leaving the Berkshires and recruiting people to come back to community came up. Someone near me suggested that no one from that population is getting engaged in aging services, so I turned to face him and put my hand out and said, ‘Hi I’m 33 and I am director of a senior center.’”

With a BA in social work and a master’s in human services with a specialty in gerontology, Girgenti began her career working in adult day centers, where she “fell in love” with her work. “Everyone wants to support youth programs, but senior services are not as popular,” she says, adding that she is proud of the work with the state’s Age-Friendly Community initiative and the Tufts Health Plan Foundation. “It’s been a huge accomplishment for us and helped us get the word out that it’s not just about youth. We have a lot more that’s happening.”

Dr. Bill Thomas and his traveling team of disrupters are making their way around the country with the Age of Disruption tour. Their next stop is Minneapolis, Minn., on Sept. 19, where they will host a Disrupt Dementia workshop and a nonfiction theater performance of Life’s Most Dangerous Game, featuring Dr. Thomas and musician Nate Silas Richardson.