You are here: Home / Blogstream / YOU ARE WHAT YOU DO.

YOU ARE WHAT YOU DO. The Sacramento Kings rank last or near the bottom among NBA teams in most defensive categories. The competition exploits the weakness routinely. The Kings players complain about it when interviewed after each loss. Not so ironically, while there isn’t a good defender on the squad, each player directs his frustration toward “we,” the team, rather than ever addressing his own deficiencies. Remarkably these guys have managed to discredit the concept of “no ‘I’ in team.” 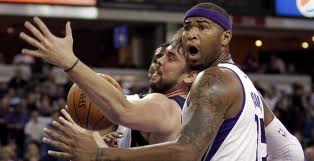 The phenomenon of group blame to obscure individual accountability is as pervasive in business (and politics and life, for that matter) as it is in sports. “We have a problem” is the default position to avoid personal accountability.
It becomes a contest to see who can point the finger first, who can protest the loudest, whose indignation is most palpable. In some delusional lack of insight, this outward perspective somehow absolves any one individual of accountability.
To identify something as everyone’s problem too often translates to someone else’s problem. The only way to confront this denial by misdirection is to reinforce the ultimate equalizer: You are what you do, not what you say.
Problem solving needs to focus on actions: “What did you do? What are you doing? What do you plan to do?” To be more effective, we (each one of us) could try doing more and saying less.