You are here: Home / Blogstream / What’s Your Financial ‘Plan B’? 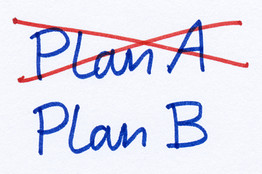 You’ve probably got a “Plan B” for if your car breaks down (call AAA) or if you run out of beer at your summer BBQ (break open the liquor cabinet).  But if you’re like most Americans, you don’t have a “Plan B” in the event of a financial mishap, a new study finds.

While 81% of Americans believe it’s very important to have a financial back-up plan outlining what you’ll do in the event of a major financial hiccup like losing your job or an extended hospital stay, only 45% say they actually have such a plan, a study released today conducted by market research firm Harris Interactive on behalf of State Farm Insurance found. What’s more, of those who do have a financial “Plan B,” less than half have actually written it down. “People know it’s important to plan for these kinds of things, but most of them don’t actually do it,” says Joe Monk, the senior vice president and chief administrative officer at State Farm.

There are a few major reasons that people don’t have a financial back-up plan, Monk says. First, many people say they don’t have time to create one. Others stress that they can’t afford to implement a plan, and thus don’t have one.  And still others say that they either “don’t know where to start” or don’t want to have a conversation with their spouse about those kinds of things, he says.  “It can be intimidating to create a plan like this,” Monk says. But, “you really need one.”

So how do you begin creating a financial back-up plan?  First, “ask yourself ‘what if,’” Monk says.  Some of the major “what if” scenarios you need to consider are as follows, he says: job loss, failing health or accident, a disability, personal liability (if someone is, say, injured in your home or car and sues you), loss of your home or property (fire or foreclosure, for example), longevity (will you have enough money if you end up living into your 90s?), adult children or parents (will you have to care for a member of your family?). Then, make a list of these scenarios and begin to talk over contingency plans with your significant other (if applicable) on each one.  So, for example, ask yourself whether you have sufficient disability, homeowners, auto, life and health insurance? (Note: State Farm profits from selling insurance.) Are you saving enough for retirement? Do you have an emergency fund that you could dig into if you had to assume care-giving responsibilities or lost your job? “Do this in doses,” he says, as it can be intimidating to tackle it all at once.