Today we’re delighted to welcome Natalie Wexler to our Virtual Book Tour. Her recently published novel, The Mother Daughter Show, is both hilarious and poignant. We know it will appeal to anyone who’s ever had a daughter, and to anyone who’s ever been one. So let’s get started: 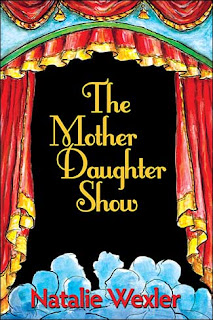 Nourishing Relationships: What inspired you to write The Mother Daughter Show?

Every year the mothers of graduating senior girls write and perform a musical revue for their daughters, and it seems like almost every year peculiar things happen between the mothers. I wanted to understand why – what was it about this situation that made people act in ways they usually don’t? One obvious possible reason was that the senior year of high school is a stressful year, for mothers as well as daughters: there’s the pressure of applying to college, the stress of wondering where your child will get in, and the emotions stirred by the prospect of your precious little girl leaving the nest.

So I wanted to explore that, but I also saw the novel as an opportunity to write more broadly about the mother-daughter relationship. I gave each of my three main characters (Amanda, Susan, and Barb) a mother of her own as well as a teenage daughter, to allow for a multi-generational aspect to the book. There are tensions between these older mothers and daughters as well, and one of the mothers, Barb, is stretched thin caring for her ailing mother while trying to control her rebellious daughter.

Also, Susan and Amanda begin to see some parallels between the way they interact with their daughters and the way they’ve interacted – or perhaps still interact – with their own mothers. (There’s nothing like having a teenage daughter to give you some empathy for your own mother!) And Barb realizes that her difficulty confronting her daughter may be a reaction against her own mother’s penchant for criticism. Inevitably, our relationships with our kids are affected by our relationships with our own parents, one way or another, and I wanted to examine that.

N R: Who is your favorite character in the book, and why?

Natalie: I suppose I feel closest to Amanda, although she is no more “me” than any of the other characters are real individuals. But she fills the role that I did in planning the show, which is to say writing funny lyrics to a bunch of existing songs. Just as I did, she gets totally wrapped up in the creative process, unable to stop herself from churning out song lyric after song lyric, even when it becomes clear that other mothers want to take the show in a different direction.

I also sympathize with Amanda’s dilemma as a longtime stay-at-home mother who needs to make money and cherishes what seems to be an impossible dream: to find a job that not only pays well but also provides an outlet for her talents and gives her a sense of self-fulfillment. That can be tough at any point in life, but it’s a real challenge for someone in their fifties who’s been out of the workforce for twenty years – and is trying to re-enter it in the middle of a recession.

N R: What turned out to be your greatest challenge in writing The Mother Daughter Show?

Natalie: Coming up with a plot that worked. My first several drafts hewed much more closely to the show itself, and several readers told me that I needed more dramatic action. Apparently the mechanics of the show just weren’t that interesting to the general public! I wanted to keep the show as the background that framed the story, though, so the challenge was to come up with another plot that I could somehow shoehorn into the one I had. At first I didn’t think I could do it, but eventually I figured it out.

N R: Your own children attended an elite private school in D.C. How much of your story was drawn from real life?

Natalie: In terms of the details, not that much. To some extent I’m satirizing things that probably go on in any private school milieu (although as far as I’m aware, Sidwell is the only school that has a Mother Daughter Show – and I’ve learned they’ve decided to discontinue it). Of course, there’s a Washington, D.C. aspect that’s distinctive. For instance, a President’s daughter attends my fictional school, and the Obama girls currently attend Sidwell. But the Presidential daughter in the novel, who is an extremely minor character, is clearly not Sasha or Malia, any more than any of the characters are real people.

What I did borrow from real life about that situation is the excitement surrounding the presence of the First Family at the school, at least when they first got there (the novel begins in February 2009). In the book, tickets to the annual auction and the school play sell at an unprecedented rate, because people think the President and First Lady might show up. That really happened, more or less. Of course, as in the book, the President didn’t end up attending many school functions, apparently because he was a little preoccupied with trying to solve the nation’s problems.

All that having been said, I think many of the themes in the book transcend the private school milieu, and I hope that just about anyone – whether their kids go to private school or not – will be able to identify with them.

N R: You are an accomplished author, having written the award-winning historical novel, A More Obedient Wife and now the contemporary satire The Mother Daughter Show. Can you speak to the differences in your approach to each project?

Natalie: The two novels are quite different, and the creative process was different in many ways as well. To write a historical novel, you have to immerse yourself in the period you’re writing about (in the case of A More Obedient Wife, the 1790s). That requires a lot of research, and even then you’re always worrying that you’ve gotten something wrong (at least I was!). So it was a nice change not to have to grapple with that for The Mother Daughter Show. Instead of burying myself in the library, I could just use my observations about the world around me.

Also, with A More Obedient Wife, my starting point was real letters between real people who lived 200 years ago. I saw my task as recreating, as much as possible, the lost lives and personalities of these people, while at the same time constructing a coherent plot. With The Mother Daughter Show, my goal was more to get away from what really happened. In a way, I knew the situation I was writing about too well—it was tempting to just write down what happened rather than create a well developed story. And at the same time, I knew too little. To create characters that work, an author needs to know them inside out, and I simply didn’t know the other women working on the show that well. Maybe it would have been easier to just write down what really happened, but it wouldn’t have worked as a novel.

Thanks, Natalie, we really appreciate your spending time with us today. You can learn more about Natalie and her writing on her website. And now it’s your turn, readers – click on ‘Comments’ below, follow the prompts and share your remarks or ask Natalie questions. We’ll be glad you did!