You are here: Home / Blogstream / Transportation Nightmares: Worst Cities in America for Seniors 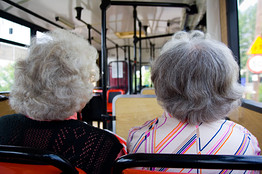 When Miss Daisy needed a ride, she just called down to her chauffeur Hoke. But for those of us without her financial outlook, things aren’t looking quite so rosy.

Local governments around the nation rank transportation as their second highest concern for older adults, just below financial issues, according to a survey by the National Association of Area Agencies on Aging. And it’s no wonder: Nearly 80% of Americans 65 and older currently live in a car-dependent suburb or rural area. By 2015, more than 15.5 million seniors will live in communities with poor or nonexistent public transportation, according to a new study by Transportation for America, a coalition of housing, business and environmental organizations that works for transportation reform.

So what’s the big deal with retiring in the ‘burbs? For one, many seniors don’t drive, which obviously makes it more difficult to get around. A study by the National Institute of Aging found that about 30% of women in their early 70s have stopped driving; that increases to 78% of women 85 or older. Men keep driving longer: Only 12% of men in their early 70s don’t, and just 45% of men 85 or older hang up their car keys.

And while there are good reasons to stop driving, doing so has an effect on physical and emotional health. Americans age 65 and up who no longer drive make 15% fewer trips to the doctor than those who drive, according to the 2004 “Aging in America: Stranded Without Options” study. They also make 65% fewer trips to visit friends and family, which can result in social isolation. “Absent access to affordable travel options, seniors face isolation, a reduced quality of life and possible economic hardship,” the Transportation for America study concludes.

The study, which ranked 241 metro areas on how well they will provide public transportation to seniors aged 65 to 79 in 2015, found some big transportation offenders:

Metropolitan Areas with Less Than 250,000 People

The top mark for public transit access for the 65 – 79 set goes to Jersey City, N.J., in which 97% can count on good public transit options in 2015. Other solid options: Los Angeles-Long Beach, San Francisco and Honolulu.  For full results of this study, click here.