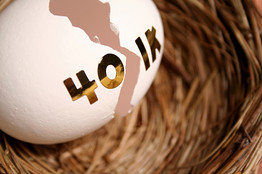 As banks have scaled back on consumer lending, Americans are increasingly borrowing from their 401(k) retirement accounts.

According to the Investment Company Institute, which represents mutual fund companies, 18.2% of participants in defined contribution plans had loans outstanding at year-end 2010—up from 16.5% at year-end 2009. Fidelity Investments puts the number at a slightly higher 20%.

It can make good sense to borrow from a 401(k) plan. After all, the interest rates on these loans are generally far below those on credit cards. Moreover, no credit check is required. And the interest payments go back to the borrower—or, more specifically, into his or her 401(k) account.

Still, there are risks to taking out such a loan. The big one: If you die, become disabled, or leave your job, you must repay outstanding 401(k) loans within 60 days. Fail to do so and the balance is counted as a distribution—which means you will owe income taxes and, if younger than 59 ½, a 10% penalty on the unpaid amount.

Each year, 401(k) participants default on some $6 billion in 401(k) loans due to death or disability, says Tod Ruble, the CEO of Custodia Financial, a Dallas-based financial services company. Among those who leave jobs, a majority default, according to Fidelity. A bill Senators Herb Kohl (D-Wisc.) and Mike Enzi (R-Wyoming) introduced in Congress in May aims to “help workers and their families to pay back loans from retirement accounts” after leaving a job by extending the repayment period until the April 15 tax deadline. The bill would also reduce the number of loans participants can take at any given time to three. (Under current law, participants can borrow up to half a 401(k) account’s balance, or $50,000, whichever is less.)

Mr. Ruble has a more radical plan. His company is lobbying Congress to allow 401(k) plan sponsors to automatically enroll participants in insurance coverage. In return for paying a $1.50 for every $1000 in borrowings, he says, the coverage would protect those who default as a result of death or disability.