You are here: Home / Blogstream / The Economic Impact of Caregiving 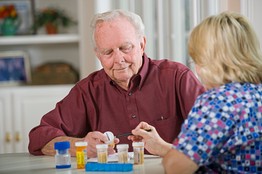 Approximately one in four U.S. adults care for an elderly relative, friend, or spouse with chronic conditions or a disability.

In 2009, the “estimated economic value” of their unpaid contributions was $450 billion, according to a recent report from the AARP Public Policy Institute, titled “Valuing the Invaluable: 2011 Update, The Growing Contributions and Costs of Family Caregiving.”

Here’s how economists arrived at that number: In 2009, there were approximately 42.1 million friend-and-family caregivers helping adults in the U.S., each of whom provided an average of 18.4 hours of care per week. Multiplying the total hours spent by an hourly “wage” of $11.16 yields $450 billion. That exceeds the $361 billion Medicaid spent in 2009 and approaches Medicare’s $509 billion budget in that year, the authors say.

All this free labor means big savings to state and federal governments, which are already struggling with rising Medicare and Medicaid costs. (Those who spend down their assets can often qualify for Medicaid coverage of nursing home costs.)

Unpaid family caregivers are shouldering a majority of the burden of long-term-care in the U.S. The report says a majority (66%) of Americans with disabilities who receive care receive it at home—and for free. Another 26% receive some combination of family and paid help, with only 9% receiving paid help alone.  Evidence from other reports suggests that since the mid-1990s, families have cut back on paid care.

As the population ages, the report says, state and local aging and disability services programs have seen greater demand for services, including transportation and home-delivered meals. But budget cuts have left them with fewer resources.

To relieve the strain on unpaid caregivers, the report recommends that policymakers and employers take steps including:

•        Amending the Family and Medical Leave Act to protect more workers and for longer periods.

•        Increasing funding for respite programs, designed to give caregivers a break.

•        Reforming Social Security to allow caregivers who leave the workforce to continue to accrue benefits.