You are here: Home / Blogstream / PowerUp: Sustainable Living In Denmark

Tweet
Share
Share
Email
0 Shares
Kudos to Virgil for exploring the dominant modes of transportation around the U.S. Having just returned from Denmark, I am always struck by the way communities are designed around the world, compared to back home.
Like much of Europe, Denmark seems to be better designed for aging and energy conservation. Even the smaller towns have pedestrian zones that accommodate all ages:

I was also impressed at the extent to which bicycles are used and accommodated. A view outside the Copenhagen train station shows how people commute to their train commutes: 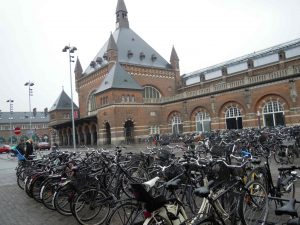 The streets are built to accommodate both pedestrians and bikes, with a separate lane and traffic signals for the cyclists: 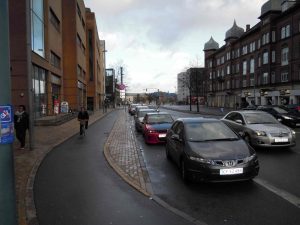 Main shopping areas feature wide, pedestrian-only streets, that are used by people of all ages:

There is also a free bike system in Copenhagen in the warm months. For a 2Kronor deposit, you pull a bike out of one of a multitude of racks, ride around the city, and return to any rack, reclaiming your change.
Remarkably, no matter how inclement the weather, the bikes and walkers were undeterred. It’s a different lifestyle, no doubt “fueled” by the high cost of gasoline, but ultimately more sustainable for energy and elders than most of the USA.
The trains are superclean and efficient through most of Europe and go almost anywhere you want to go. I’ve been to England and continental Europe 5 times in the past decade and have yet to rent a car.
As I head for Toronto this week, I have a choice. Normally, one can drive there in 2-1/2 hours, but I am flying out west afterward. No contest. I’ll hop on the only decent train route one can still get out of Rochester–the Amtrak “Maple Leaf”.
To fly coach from Rochester across the 50-mile lake to Toronto is either $800 direct, or $450 with an incomprehensible 300-mile hop in the opposite direction to LaGuardia. First class on the ‘Leaf: $84.
See you in the snack car.