You are here: Home / Blogstream / Pharmacists As Champions of Eldercare 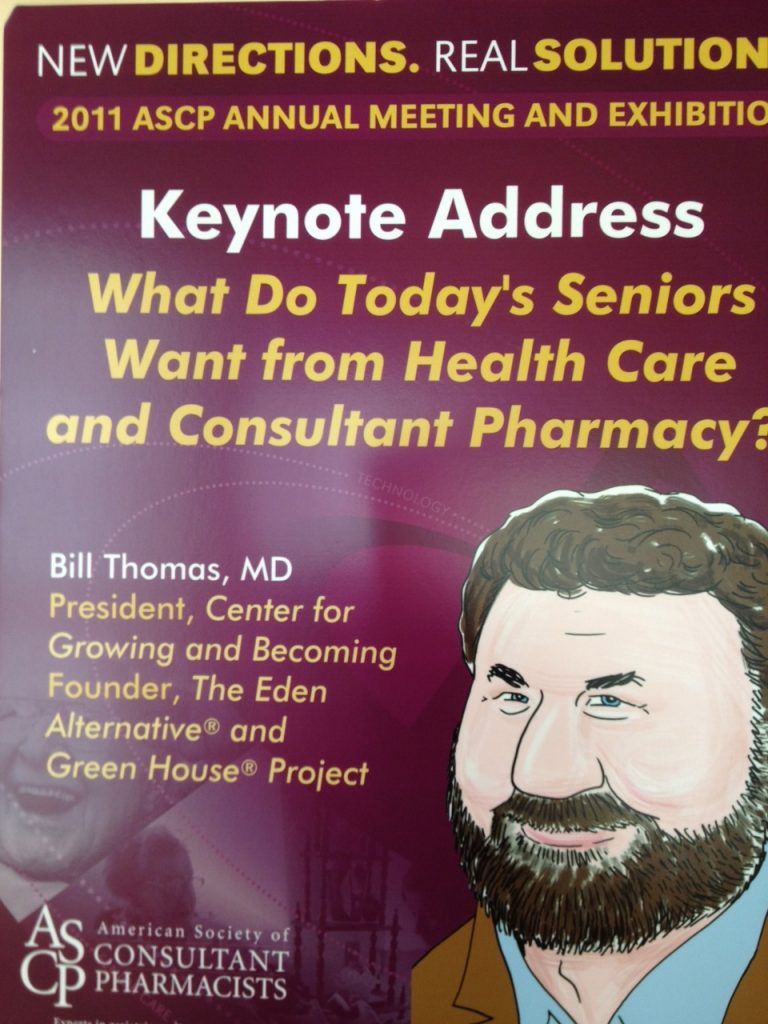 Dr. Bill Thomas is about to give the keynote address at the 2011 American Society of Consultant Pharmacists meeting in Phoenix.

Why are pharmacists champions of eldercare? They have the power to act as a safeguard against the extreme over-medication of older adults. Below is a report ChangingAging ran this summer on how one pharmacist is making a huge difference in the lives of nursing home residents.

When it comes to the chronic over-medicating of older adults, AARP has been a consistent critic of Big Pharma and the doctors who overprescribe dangerous cocktails of drugs without fully understanding their impact on older adults.

And considering the size of this epidemic, it’s a darn good thing AARP is trying to do something about it.

This summer AARP is launching a new feature at AARP.org called “Ask the Pharmacist,” featuring Armon B. Neel Jr., co-author of the upcoming book “Are Your Prescriptions Killing You? How to Prevent Dangerous Interactions, Avoid Deadly Side Effects, and Be Healthier With Fewer Drugs.” A certified geriatric pharmacist, Neel has been evaluating the medications older people are taking for more than 40 years. AARP writes:

The way Neel sees it, pharmacists are often a patient’s last line of defense in a nation of doctors who, more often than not, don’t know much about the drugs they are prescribing and the geriatric population they are treating.

“You see so many cookie-cutter approaches to taking care of old people,” Neel says. “Almost 100 percent of the people I see as outpatients are overmedicated, because the ones I see are the ones who are having problems. If I go into a long-term care environment, it’s about 80 percent.”

AARP and advocates such as Neel  (and ChangingAging’s Dr. Bill Thomas — see video below) — have strongly advocated for wiser use of medications for years. However, the number of people hospitalized for medication-related problems continues to surge, from 1.2 million in 2004 to 1.9 million in 2008. More than half are 65 or older.

The reasons for this epidemic are numerous and troubling.

Older adults also are excluded from more than half of all clinical drug trials, despite consuming 34 percent of all medications. Researchers say this exclusion leaves a huge blind spot that makes it impossible for doctors to safely prescribe some drugs to older patients.

Advocates such as Neel argue that most doctors lack the basic geriatric training to understand the physiology of older patients as it relates to the chemistry of medications. They point to studies indicating that doctors are influenced by drug companies who heavily market medications to their offices, providing free samples, gifts and even meals. And older adults are a huge source of profit for drug companies as they make up 34 percent of the market.

It’s easy to blame doctors and Big Pharma for the over-medication epidemic, but the problem will not be solved until everyone — consumers, caregivers, doctors and pharmacists — become better informed and work together, said AARP New Hampshire Director Jamie Bulen.

AARP New Hampshire has pioneered education tools for healthcare providers and consumers to better educate themselves on proper use of medications, including the online Make the Most of Your Meds consumer toolkit.

“Consumers can learn to become their own medication managers,” Bulen said. “Patients, caregivers, nurses and doctors all need to become better educated in what to look for in harmful drug interactions. When we get everyone working together we’ll have a better opportunity to tackle this problem.”