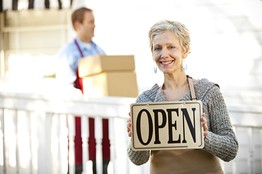 According to the nonprofit Ewing Marion Kauffman Foundation, individuals between the ages of 54 and 64 represented 22.9% of the entrepreneurs who launched businesses in 2010 – up from 14.5% in 1996. Since 2007, the foundation says, this age group has created new businesses at a higher rate than any other. The data, writes Kauffman’s research director Dane Stangler, indicates “the United States might be on the cusp of an entrepreneurship boom—not in spite of an aging population but because of it.”

Still, failure rates for new businesses are high—as high as 90% by some measures.

Accordingly, we sat down with Eric Ries, Entrepreneur in Residence at Harvard Business School, to talk about his forthcoming book, “The Lean Startup,” which Crown Publishing Group is scheduled to publish on September 13. Here are edited excerpts:

Q: The stereotype of an entrepreneur tends to be that of a young technology genius. Yet the statistics tell a different story. What’s going on?

A: The idea that you have to be a young 20-something just out of college to be a successful entrepreneur is just not true. Older entrepreneurs outperform younger ones in terms of their success rates. All you need is insight and a willingness to test your ideas.

Q: How can entrepreneurs reduce the odds of failure?

A: Entrepreneurial vision is very important, but it’s important to test it as quickly as possible with empirical data. One good place to go is the web site kickstarter.com, which helps projects get funding. Before you go to the trouble and expense of producing a product, you can list it for a specific price on kickstarter and see whether people pre-order it. If you never produce the product, the web site gives customers their money back. By looking at pre-orders you can gauge demand for your idea. If you simply ask people whether they think something is a good idea or whether they would pay for a product, most are not going to be able to give you an accurate answer. People are very unpredictable. With kickstarter, they send the money up front, so you can see how they will really behave.

Q: Is it important to write a business plan?

A: I think business plans are obsolete. It’s not that planning isn’t valuable. But the goal should be to use tools such as kickstarter to research demand, rather than to speculate on demand in a business plan. You should do this type of business experimentation as quickly as possible so you don’t waste time or money on product development. The failure rate for startups is astronomical. We can do a lot better.

Q: What if you want to test a service, instead of a product?

A: Instead of building a big, expensive version of your service, build the smallest, simplest version that enables you to get started testing it with potential customers. For example, some entrepreneurs I know in Austin, Texas had an idea for a service to help parents with meal planning that incorporates family members’ food preferences, provides recipes, and keeps track of grocery lists. Rather than spend money developing software, they spent time with customers every week in the grocery store. They helped their customers by doing meal planning by hand. They wrote out menus on paper and as they got better at serving the needs of these customers, they added others. When they had a critical mass, they started to automate the service, by developing software. The rationale is that if no one is willing to pay for the concierge version of the service, no one is going to pay for the software either. The idea is to get just 10 customers to try it out and see how many people will pay for it. These techniques are very simple.

Q: What if you are offering a service, such as carpentry work, and you know there is a market. How can you go about testing whether your business will succeed?

A: I know someone who started a home interior design company. He knew that people would spend money on home refurnishing, but would they want to buy it from him? He spoke to prospective customers, to find out why it was that they wanted to remodel. It turned out that many potential customers in the place where he was based were women. He had the realization that they were not just buying home remodeling, but the sense of control a designer could create for them over their environments. He tried out tag lines for his business until he found a hit—which enabled him to market himself as offering something they could not get elsewhere. The tag line he chose was “unlike your husband, we listen.”

Q: Should you spend money designing a web site for your company?

A: You can create a web site for little to no money. Keep it basic and simple and don’t get distracted with business cards or stationary. It used to be that you had to wear a suit and hand out business cards. Those days are over. There are companies including unbounce.com that allow you to create web pages so that people can sign up for your service or product. [Ries, who is an adviser to unbounce.com, owns an equity stake in the company.] For example, if you are planning to launch a cleaning and organizing service, you can create a page geared to moms and you can create a separate page for businesses. Those web pages will look very different but this enables you to test both versions and see which does better.