You are here: Home / Blogstream / New Barriers To Reverse Mortgages 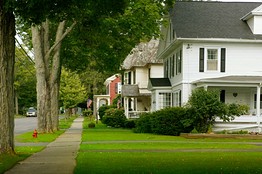 Changes are in store for the way reverse mortgages are processed that might make it more difficult for some borrowers to qualify.

For fees that can amount to as much as 5% of a home’s value, reverse mortgages allow people age 62 or older to convert their home equity into cash. The homeowner can elect to receive a lump sum, a line of credit or monthly payments. The loan is due, with interest, when the borrower dies, moves, sells the house or fails to pay property taxes or homeowner’s insurance.

In the past, the amount a borrower received was determined by his or her age and property value, says Peter Bell, president of the National Reverse Mortgage Lenders Association. But on Oct. 5, the Federal Housing Administration, which insures virtually all reverse mortgages, told lenders that they are also free to consider a borrower’s “financial capacity and credit assessment criteria … in the origination and approval of” reverse mortgages.

Starting a week ago, MetLife Bank, the largest originator of reverse mortgages, began examining applicants’ finances. The goal: To gauge whether they have enough in the way of income and assets to cover the ongoing costs of defraying property taxes and homeowner’s insurance premiums.

Mr. Bell says the U.S. Department of Housing and Urban Development, which oversees FHA, is working on new regulations–likely to debut in 2012–that would require lenders to perform such financial underwriting. As a result, he adds, “it is possible that some borrowers who could have gotten a reverse mortgage before” will no longer qualify.

Still, Mr. Bell says, the number of people likely to be affected will be nowhere near the numbers impacted when, in response to falling home values, HUD cut the amount of equity that reverse-mortgage borrowers could extract from their homes. From fiscal year 2008 to 2011, the volume of Federally-insured “home-equity-conversion” reverse mortgages fell 35%.

The new regulations are also likely to give lenders the right to require borrowers with smaller financial cushions to receive monthly payments, rather than a lump sum. To ensure that borrowers have enough cash to cover their property taxes and homeowner’s insurance premiums, the new regulations may also allow lenders to set aside a portion of a reverse mortgage’s proceeds for those expenses.

In recent years, the number of reverse mortgage borrowers at risk of default on these loans due to an inability to pay insurance and property tax bills has risen. Mr. Bell says a new counseling program has put about 60% to 70% of those in arrears on a path towards retaining their homes.