You are here: Home / Blogstream / Inside the First Gay Continuing Care Retirement Community 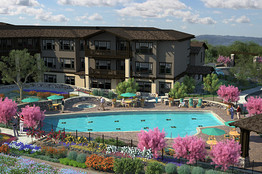 June proved a historic month for the gay rights movement, as New York became the largest state in the nation to grant gay and lesbian couples the right to marry.  Coincidentally, a related – albeit, of course, less significant — event occurred alongside this milestone: the opening of the first licensed continuing care retirement community for gays and lesbians.

As I reported in a piece for SmartMoney.com, so-called “affinity” retirement communities — which cater to retirees who share a common interest, trait or hobby – are a growing trend in retirement living.  And while there are already a handful of these affinity retirement communities for gays and lesbians, none offered a continuum of health care — on-site independent living, assisted living and Alzheimer’s and dementia care — for this community until the opening of Fountaingrove Lodge this month, the company says.

The 10-acre Fountaingrove Lodge in Santa Rosa, CA offers many of the typical amenities that high-end CCRCs (continuing care retirement communities) do, including a pool, tennis courts and fitness center, in addition to the healthcare options.  It also gives residents some more surprising perks including a “pet park,” pet care, a movie theater, on-site chauffeurs, the option to have meals delivered into your home and a “wine cave” and cellar.  What’s more, like other affinity communities, it offers residents “a certain comfort and familiarity that results from being with those who can directly relate to your life story and circumstances,” says Tim O’Bayley, a spokesperson for the community.

Of course, these amenities and perks don’t come cheap.  To get a spot in the community, you’ll pay between about $295,000 and $925,000, and that’s on top of monthly dues that range from about $2,500 to upwards of $6,100.  (Most CCRC entrance fees fall into the $160,000 to $600,000 range, so the larger properties in Fountaingrove Lodge are on the pricey side.) Plus, you’ll pay extra for services like pet care, home-delivered meals and a chauffeured town car into town.  All in all, your first year’s bill — including entrance fee, monthly dues and a few of the ala carte extras — could amount to nearly seven figures if you opt for one of the most expensive homes in the community; however, you can spend significantly less by opting for one of their one-bedroom homes.

That said, it’s an option that a retiree who hoped to live in a gay and lesbian community hasn’t had before – luxury within a community of like-minded people that also offers the assurance that your healthcare needs can be taken care of without your having to move, no matter how sick you get. What’s more, because it is a gay friendly establishment, O’Bayley says couples may avoid a lot of the health-care red tape that many face in hospitals that might not recognize their relationship.