You are here: Home / Blogstream / Hurricane Irene: Keeping an Elderly Parent Safe in a Storm 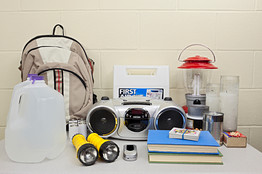 As Irene threatens the East Coast, adult children may be wondering whether an aging parent in the region will be safe during the storm. In any extreme weather – heat, cold, storms of all kinds – older adults are among the most vulnerable, and common precautions that suffice for younger people may not be enough, or even appropriate, for mom or dad.

If a parent lives in a retirement community, nursing home, or assisted-living facility, start by calling the administrators there, says Marcus Harazin, deputy director of the New York State Office for Aging: They should have a disaster plan they can share. If a parent is living independently, here are some other resources that might help.

If there are mandatory local evacuations, your parent should follow the guidelines from the local government. If you don’t live in the area, call a nearby sibling or one of your parents’ friends to help your aging parent evacuate, says Hazarin; if you don’t know anyone in the area, call the local Red Cross or Area Agency on Aging, both of which can help you figure out nearby shelters and transportation, he adds.

Even if evacuation isn’t mandatory, a phone call to those agencies might be a good idea, especially if a parent has medical conditions or other special needs. The Red Cross often sets up dedicated shelters for the elderly and sick who need special care during a storm, and these may be a good option for those with severe medical issues.

In addition to the emergency basics – one gallon of water per person, a battery-operated radio, and a flashlight with extra batteries — older people have special hurricane needs as well, says Mary Johnson, a spokesperson for The Senior Citizens League. They need at least a week’s worth of all medications (ask the pharmacy to deliver these now) and a week’s worth of non-perishable food (this is especially important for the elderly as they often live alone and have little food on hand) like granola bars or Ensure, says Hazarin.  Johnson says you also need to ensure that if your parent requires oxygen or equipment that uses electricity, that there is “a battery back-up that will cover several days.”  And make sure they have a battery powered fan on hand, as the elderly are susceptible to heat, which could be a problem if the home loses electricity and the air conditioner cuts out.

Even in non-extreme weather, it’s helpful to have all of your parent’s medical basics on a single sheet of paper or two: contact information for all doctors, as well as a list of all medications taken, health insurance information, and Social Security numbers. Also, “it’s helpful to have several communications options — cell, internet and landline phones,” Johnson says. That includes not only the parent’s contact info, but the same information for nearby neighbors.

Finally, know that it might be hard to get to a parent post-storm. Emergency officials may not let non-residents enter the area immediately following a storm. To help make your case, carry proof of residence for your parent and a note from a doctor saying you are a primary caregiver.