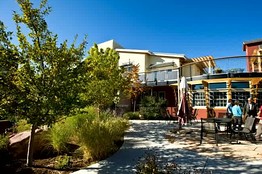 After spending nearly three decades in St. Louis, Kathyrn McKay says she was ready to relocate to a “more progressive” city.  On a visit to Boulder, the then-57-year-old retiree found just that, though the living arrangement wasn’t what she had expected: a so-called co-housing complex for adults called Silver Sage. “I loved the sense of community I felt there,” she says.

Co-housing projects for older Americans, communities of homes on shared land that residents build and operate themselves, are on the rise. The first such development, Glacier Circle in Davis, Calif., opened in 2006. Since then, at least three more have been built — including ElderSpirit in Abingdon, Virginia and ElderGrace in Santa Fe, N.M — and roughly another eight will be under construction by the end of this year, says Charles Durrett, a co-founder of co-housing development company McCamant & Durrett Architects and author of “Creating Cohousing: Building Sustainable Communities.”

What’s driving the new trend? Part of it may be boomers’ hippie mentality, says Andrew Carle, director of the senior housing administration program at George Mason University. “These things are kind of like communes” — only with nicer houses, he says. And unlike in a typical retirement community, residents participate in nearly all the decision-making – from designing homes and landscaping to planning meals and social events. These constant interactions, residents say, can build a stronger sense of community and friendship than one might not get in a run-of-the-mill retirement complex.

Of course, that extra responsibility isn’t for every senior. “This is a real estate development, it’s a business,” Carle says. “This is hard work.” On top of that, the constant interaction with neighbors can be a pro or a con, says Sandra Timmerman, the director of the MetLife Mature Market Institute. “Sometimes people can annoy you.”

Still, residents claim these arrangements are better than typical retirement communities. Joani Blank, 74, who lives in a co-housing community in California, says she likes working together with her neighbors on projects, and enjoys living with the smaller group of people typical of a co-housing community. Most complexes have about 20 to 40 households, according to The CoHousing Association of the United States, while retirement communities often have 100 or more homes. Residents in co-housing complexes have their own homes – and privacy – but are still part of what feels like a “little village,” says Timmerman.

For retirees interested in creating a co-housing community, Durrett says start-up costs typically range from $150,000 to $1.2 million per person, depending on the location, and the size, quality and number of homes. Monthly dues and maintenance fees often run another $100 to $300 a month.  To learn more about co-housing, check out the CoHousing Association of the United States. .