You are here: Home / Blogstream / Ford to Aging Boomers: Can You READ THIS NOW? 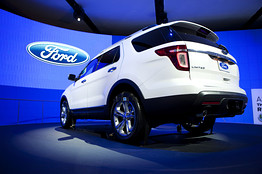 If the font of your local newspaper seems to have gotten smaller, or menus suddenly look better from 18 inches away, Ford Motor Company thinks it’s got the car for you — no reading glasses required.

Beginning next year, Ford will make the font thicker and bolder in the interiors of its Ford Edge and Ford Explorer. That means consumers can expect to see wording that’s roughly 40% wider on interior display screens and controls, including your center dashboard display screen and A/C buttons. What’s more, the company has plans to expand (literally) this effort into other models in the coming years.

The move is an effort to make it “easier for people of all ages, particularly aging baby boomers, to read display fonts,” the company said in a statement. (Ford conducted a “legibility study,” which found that people’s eyesight begins to decline in their 40s and worsens from there; these results mimic the results of previous studies as well). Of course, it’s also likely an effort to sell more cars to the lucrative boomer demographic.  For its part, the company wrote in a statement: “Today, aging consumers are of great interest to companies including Ford. For the first time, people age 65 and over will outnumber children under the age of 5. It’s a transformation that’s changing the world, along with all kinds of products in it.”

To be sure, the bigger font isn’t going to send sight-challenged boomers racing to their Ford dealer. For one, it has the potential to offend a generation that doesn’t exactly consider itself “old” (isn’t 60 the new 40?).  Furthermore, font is just one small part of a larger equation, which includes quality, price and service.

Still, the company seems to have high hopes for the BIG FONT. “We know from this [legibility] study that we can improve the driving experience for many people by bolding the fonts on our controls,” says Ford research engineer Shannon O’Day.  “This is important because we want to continue appealing to all consumers while making driving easier and potentially safer for a wide range of people.”

Readers, what do you think?  Could font impact your selection of a car?