You are here: Home / Blogstream / Estate Tax Planning for 2012 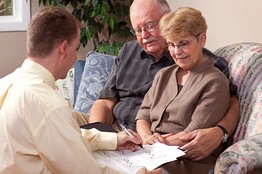 If you’re among the 1%, make estate planning part of your New Year’s resolutions.

What’s more, as a WSJ article on the topic says, “the tax rate on gifts above those amounts fell to 35% from a scheduled 55%, a boon to ultrawealthy people who want to give away even more money.”

This fall, rumors swirled that the so-called Super Committee–composed of 12 members of Congress charged with cutting $1.2 trillion from the Federal deficit by Nov. 23–would reduce the $5 million gift and estate tax exemptions by year-end. But aside from failing to agree on a deficit-reduction plan, the Committee also failed to tackle a reduction in the estate tax exemption.

That gives wealthy families another year in which to take advantage of these higher limits. For 2012, the amount one individual can give another annually without incurring a gift tax remains at $13,000. But because the gift and estate tax exemptions are indexed for inflation, the $5 million lifetime gift and estate tax exemption limits will rise to $5.12 million–or $10.24 million per married couple.

“Considering that the gift tax exclusion had been frozen at $1 million for many years,” writes Blanche Lark Christerson, managing director at Deutsche Bank, “this increase represents a remarkable opportunity to pass property to heirs free of gift tax.”

In 2013, the gift and estate tax exemptions are both scheduled to revert to $1 million, unless Congress acts.  The top estate tax rate will snap back to 55%, with a 5% surcharge on taxable estates of between $10 million and $17.184 million, according to Ms. Christerson. President Obama, Ms. Christerson says, has urged a return to the $3.5 million estate tax exclusion in effect in 2009. (The gift tax exemption, however, would fall back $1 million.)

In 2012, families can also elect to take advantage of “portability.” As Ms. Christerson explains: “If dad predeceases Mom in 2011 or 2012, she can use what remains of Dad’s estate tax exclusion.”

To be able to do so, the executor for Dad’s estate must make an election on his estate tax return. In other words, “Mom won’t inherit his unused exclusion unless a federal estate tax return is filed–even if one is not otherwise required because Dad’s estate is” under the  $5 million exemption amount, Ms. Christerson writes.

Portability, she adds, is not available for state estate tax exclusions.