You are here: Home / Blogstream / ESKATON WHETS ITS APPETITE FOR ADVOCACY.

ESKATON WHETS ITS APPETITE FOR ADVOCACY. Eskaton has been dipping its toes into the public policy arena over the past year. One effort produced quite a splash. Another created a ripple effect. And a third was just for show. 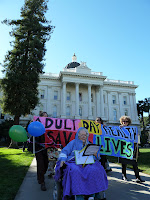 ADHC RALLY — February 1, 2011: Adult day healthcare lives to fight another day. Or, more accurately, fights to live another day. Dozens of older and disabled adults, many in wheelchairs, and all participants of Eskaton’s Adult Day Health Center rallied at the California State Capitol on February 1, 2011. The very demonstrative appeal to legislators and the Governor to save the state’s adult day healthcare generated dozens of news stories and supported the successful grassroots advocacy to preserve the program. Senate Pro Tempore Darrell Steinberg joined with participants that day. While Assembly Member Mariko Yamada, chair of the influential Assembly Committee on Aging and Long-term Care, issued a statement in November on the program’s protected status: “We must continue to fight for this program and all programs that help our most vulnerable elders and disabled adults live in the community with dignity while also saving the state money.” 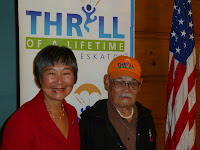 Upon returning from his triumphant reunion in Japan with his brother from whom he was separated as a result of WWII more than 60 years ago, Eskaton resident Minoru Ohye was the guest of honor at a State Capitol reception hosted byAssembly Member Mariko Yamada. The 86-year-old Ohye participated in Eskaton’sThrill of a Lifetime initiative, which thanks to the support of Yamada and the generosity of private donors, arranged for Mino and his brother Hiroshi to enjoy a thrilling, week-long reunion in Japan. “I am ‘thrilled’ beyond words,”said Yamada, who worked closely with Eskaton staff leading up to and during the extraordinary trans-Pacific reunion. 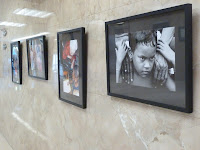 Eskaton’s “Generation Nation: One Nation, Under Age” photography exhibition shares the poignancy and positive benefits of positive interaction between youth and older adults. The 12 photos featured individuals from Eskaton’s Kids Connection project and Generations United’s international photography contest. The exhibition premiered October 2010 on the historic Governor’s Marble Wall at the California State Capitol where tens of thousands of visitors as well as the governor, legislators and staff viewed and read the story behind the powerful imagery. After touring throughout Northern California, the exhibition traveled to Washington, D.C. in July 2011 for a special viewing at GU’s annual conference.

Formal legislative advocacy, lobbying, surely has a role in attempting to influence a positive aging experience, though favorable outcomes require enormous commitments oftime and resources. On the other hand, while Eskaton’s recent public relations strategies may not stem concerns about the encroaching “Silver Tsunami,” the exposure and goodwill certainly do influence public opinion. And that attracts everyone’s attention, even elected officials.