You are here: Home / Blogstream / ESKATON IS A “BLUE ZONE.” 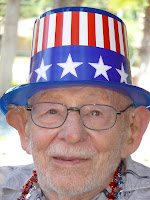 ESKATON IS A “BLUE ZONE.” Northern Californians could be closer than most to discovering the secret to longevity. “Blue Zone” is the term a National Geographic explorer Dan Buettner uses to describe a handful of aging-friendly locations around the world. These are places where inhabitants live longer, healthier … and happier.
One village of 2,500 in Sardinia, for example, has four centenarians – “a staggering number, given that the ratio of centenarians in the U.S. is roughly one per 5,000,” Buettner notes.
Impressed? Then consider this: Among its 3,500 residents Eskaton boasts at least three-dozen people 100-years of age and older, which makes the ratio of centenarians within Eskaton’s “Blue Zone” 50 times greater than in the general population.
Celebrate Eskaton’s 100+ at http://www.eskaton.org./