You are here: Home / Blogstream / Do You Have Enough Cash for a Down Market? 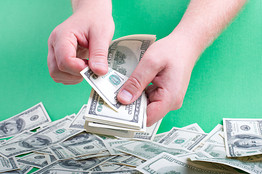 As I reported in my “How to Tap Your Nest Egg in a Wild Market?” story, recent market fluctuations led many retirees to wonder how much they could take from their retirement portfolio for income and still be safe.  But perhaps an equally important question for some retirees, especially those who retired early or have smaller nest eggs, say advisers: How do I avoid taking money out of my retirement funds altogether?

One way to avoid having to tap your nest egg is to make sure you have enough liquid assets on hand to cover your annual retirement expenses. “Retirees need three to four years of liquid, stable assets lined up to cover expenses,” says Frank Boucher, founder of Boucher Financial Planning Services in Reston, Va. These assets include savings — look into online banks or credit unions, as these tend to pay higher rates — money market accounts and CDs, which can be laddered so that you’ll get payouts each year, he says. This way, in years where the market isn’t doing well, retirees can pull from their liquid assets to cover expenses, rather than having to take losses.

Another way is to make sure that your portfolio generates enough guaranteed income (along with Social Security payments) to cover basic retirement expenses, so that you don’t have to depend on stock market returns to pay your bills each year. To do this, set up a 10- to 15-year bond ladder, including Treasurys and I Bonds with differing maturities, says Joe Alfonso, founder of Aegis Financial Advisory in Santa Clara, Calif. This bond ladder, along with Social Security, should cover at least your basic expenses like food and housing, he says. “This generates the cash flow that clients need,” he says.

Of course, this isn’t to say that you should never withdraw money from your retirement savings in a down market. In fact, many retirees with a diversified portfolio should still be able to withdraw between 3% and 4% per year even in a bad market and still have their money last through retirement, says Rick Kahler, president of Kahler Financial Group in Rapid City, S. Dak.  Bottom line: Talk to your financial adviser about the best strategy. Need a broker now? Click here to check out SmartMoney’s annual ranking of the best and worst discount and full service brokers.