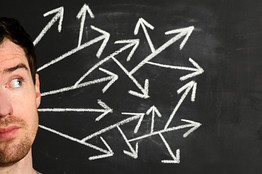 When I am in department stores, I quickly become overwhelmed by the seemingly endless number of choices. Invariably, I retreat to a smaller store where someone has the good sense to limit the number of items I can pick from. A growing body of research suggests that 401(k) investors react much the same way when shopping for investments.

According to a recent report by 401(k) administrator Diversified Retirement Corp., once a plan offers more than 14 investment options, participation rates fall–“perhaps because participants begin to feel overwhelmed with investment decisions.”

Diversified puts the optimal number of investment options at 10 to 14—a range that correlates with the highest 401(k) participation rates.

Last week, JP Morgan Asset Management unveiled a more radical proposal. At a news conference, the company—which serves as a 401(k) administrator—launched a new offering that would allow 401(k) plan sponsors to streamline investment menus to the point where they include just four mutual funds: A target-date fund series, a diversified equity fund, a diversified bond fund, and a diversified cash fund.

“It can be powerful to limit choice,” says Anne Lester, a managing director and senior portfolio manager at JP Morgan Asset Management. “It frees you up to focus on asset allocation and rebalancing decisions.”

While it may sound anti-consumer, it’s actually part of a powerful trend, whereby 401(k) plans are implementing changes designed to take the decision-making out of employees’ hands. The goal: To inject some of the professional management of the old-fashioned defined benefit pension plan into the defined contribution system.

Isn’t some of this risky stuff? Well, yes. But according to the funds’ architects at JP Morgan—who cite Modern Portfolio Theory—small doses of risky assets blended into a larger portfolio can actually reduce risk.

“If a high yield bond fund was offered as a standalone investment option, it could be abused” by 401(k) investors, who might plow most or all of their money into it in the hope of earning outsized returns, says Michael Falcon, head of retirement at JP Morgan Asset Management in the U.S. and Canada. In contrast, “as part of a diversified portfolio, a high yield bond fund can add value.”

JPMorgan says it is in talks with about a dozen 401(k) plan sponsors about replacing their investment lineups with the new streamlined offerings.