You are here: Home / Blogstream / A Stethoscope in the Steering Wheel 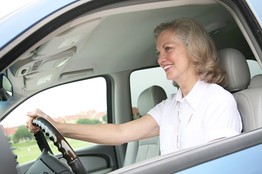 Someday soon, your car may be the one to warn you of an impending heart attack. Ford Motor Co. recently announced that its researchers are working on a variety of high-tech tools aimed at helping drivers better monitor their health. The company’s motivation isn’t altruistic: With the number of Americans ages 65 and older expected to more than double by 2050, Ford wants to design vehicles that appeal to older folks.

This isn’t the first initiative Ford has taken in that direction. The company recently announced that starting in 2012, the font on the display screens and controls in its Ford Edge and Explorer models will be thicker and bolder–changes the company plans to roll out to other vehicles in its fleet down the road (so to speak).

The health-related initiatives are a little farther away. A Ford spokesman says the company has yet to set a launch date, but consumers can expect to see some of the new offerings within a couple of years.

One feature on the horizon: A driver’s seat, packed with sensors, that can detect the occupant’s heart rate. Although still under development, the technology can  transmit the data to “medical experts or online computer software” for analysis. The software or experts would then issue alerts to those at risk.

Ford has also announced two other technologies, aimed at helping people with asthma and diabetes manage those conditions “on the go.” With these, a driver can connect his or her smart phone, via Bluetooth, to Ford’s SYNC “infotainment” system and use voice-controlled technology to monitor glucose levels or the local pollen count. The system would issue alerts when necessary.

Part of Ford’s sales pitch: Better monitoring of these conditions can prevent accidents.

But are the systems accurate? After all, a false reading could cause the very heart attack the technology is trying to prevent. Ford says its heart rate sensors “achieve highly accurate readings for up to 98% of the time spent behind the wheel, even at this early stage of development.”