You are here: Home / Blogstream / A New Kind of Nursing Home 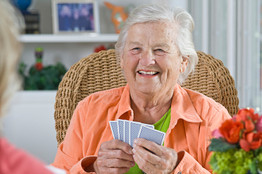 The nursing home tends to conjure up visions of big, institutional buildings with rows and rows of identical rooms, trays full of lackluster food and an acrid smell of disinfectant.  But a new company is trying to change that — creating intimate homes for nursing home residents.

The Green House Project works on the “de-institutionalization” of nursing homes by creating a series of small homes — rather than a huge nursing home building — that  residents can live in.  The 6,400 – 7,000 square foot homes house about 10 residents apiece.  Each resident gets a private room and bathroom and then shares the main living area, dining room and kitchen with the others.  Within each of the residents’ bedrooms, there is a locked medicine cabinet that contain their meds. The homes typically have dedicated nursing assistants and then a single registered nurse who oversees between two and three homes. “This is an excellent idea that could really catch on,” says Sandra Timmerman, the director of the MetLife Mature Market Institute. “As we look to the future, this is the kind of thing boomers might really want.”

The challenge — as with all nursing homes, which cost individuals, on average $77,000 per year — might be the expense of such projects, says Timmerman.  And for consumers, these kinds of facilities can get pricey, as Medicare doesn’t always cover nursing home care. (Prices for the Green Project vary depending on your location.)  And while these facilities have a lot of appeal, they may not work as well for extremely sick residents who need more intensive  medical monitoring.

Still, the model likely makes sense given the misgivings about the traditional homes among the aging population. Many older people will end up in a nursing home at least at some point in their lives, but they don’t typically like the idea of it, Timmerman says.  In fact, more than three in four retirees say that they are “very” or “somewhat” worried about being in an institutional environment that is not as comfortable as their homes, according to a study released last month by the Robert Johnson Wood Foundation, which has helped fund the project.

Currently, there are just over 100 so-called “Green Homes” in 27 states across the country.  The project was funding in part by a grant from the Robert Wood Johnson Foundation, a nonprofit organization devoted to improving health care.  To find a location near you, click here.