You are here: Home / Aging Literacy / 4 Ways to Save on Prescription Drugs 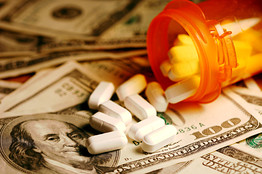 Doctors rank price as their “least important” consideration when prescribing drugs. Hey, thanks. Given the recent rise in drug prices and the increasing number of patients, especially those over 60, who are taking multiple medications each month, price is important.

In 2010, the price of prescription drugs increased nearly 7%, the largest jump since Barclays Capital began tracking this data in 2000, according to the company’s study of the 130 top-selling drugs released in 2011. Many diabetics and heart disease sufferers got an even bigger shock: Prices for blood-pressure pill Benicar jumped 29%; cholesterol medication Lipitor was up 12%; and blood-thinner Plavix increased 13%.

These price increases often have the biggest effect on baby boomers and many retirees, especially those facing the double-whammy of fixed incomes and the dreaded Medicare “donut hole.” Fewer than one in ten people 59 or younger take four or more prescription drugs in a month, but more than one in four people 60 and up do, according to an analysis by the CDC.

Most consumers know they can save money on drugs by switching from name brands to generics, buying drugs through the mail, using prescription drug discount cards and picking the right Medicare plan (check out the plan comparison tools on Medicare.gov and PlanPrescriber.com and the cost comparison tool on MedicareNewsWatch.com), but here are a few lesser-known ways to save.

1. Get smart about the pharma market

In the next two years, the patents on more than ten blockbuster drugs will expire. These drugs include Lipitor for high-cholesterol; Levaquin, an anti-biotic; Protonix, an antacid; Plavix, a blood thinner; Actos for diabetes; and Enbrel, for arthritis. For consumers, that means more opportunities to switch to lower-priced generics of these choice drugs, says Ross Blair, president and CEO of PlanPrescriber/eHealthInsurance, a site that provides Medicare plan comparison tools – switches that can save you hundreds of dollars a year.  Click here for a more comprehensive list of drugs that will soon lose their patent.

For obvious reasons, it’s important to take your prescription medication in the doses ordered by your doctor, but that doesn’t mean you can’t split pills. “Many drugs have the same co-pay for a 10-milligram and, say, a 20-milligram pill,” says Blair.  In some cases, you could cut the bigger pill in half, he says. This guide will help you figure out which pills you should — and shouldn’t — split to save money.

“The prices between pharmacies can differ by 50% even among the same chain in the same county,” Blair says. “Consumers should shop around for the best deal.”  A Consumers Reports study from 2011 found that Web-based pharmacies typically offered the best deals; for those who don’t want to use a Web-based pharmacy, the report suggested they call ahead for price quotes and ask their pharmacy for a discount or to “meet a competitor’s price.”