You are here: Home / ChangingAging / What The Doctor Ordered

I’ve been running a program for men in the early stages of dementia (talk about a job for a hostage negotiator). This poem brought more men to the program than all my spruiking, brochures and referrals.

He felt inside he was still able to control his life,
’though he had a little difficulty since he lost his wife.
And his daughter lived in Queensland; and his son, — away at sea.
‘Well,’ he thought, ‘I always was my own best company.
Besides, there’s one advantage that being single brings:
there’s nobody to fuss me when I can’t remember things.
I’ve got my books and telly, I’ll get along okay.’
So he didn’t feel dementia creeping on him day by day.

But his doctor saw it when the old man called in with the ‘flu.
‘I think I’ll get the District Nurse to keep an eye on you.’
Of course the old man grumbled that he would be quite okay,
but still, the District Nurse called in to see him the next day.
She was young and bright and pretty and she even made him smile
and he found that he could put away his troubles for a while.
So weeks went by ‘til one day, when she came to visit, she
said, ‘Get your coat and come with me. There’s something you should see.

I have to pick up Mister Hughes, he’s three doors down from you,
to take him to his Men’s Shed and I’d like you to come too.’
He started to protest this but she gently took his arm
and smiled and said, ‘Oh, please come. It won’t do you any harm.’
What could he say but, ‘Alright,’ and he turned and locked his door,
not knowing that this day would change his life for evermore.
For ‘though some pessimistic thoughts were running through his head,
they soon gave way to wonder as he walked into the Shed.

‘Cause the men inside were just like him; he wasn’t out of place.
To any keen observer he was just another face.
The District Nurse said, ‘Look around, and I’ll be back at ten,
that gives you time enough to get to know the other men.’
Then Mister Hughes said, ‘Call me Frank. Let’s get a cuppa tea,
then we can look around a bit. There’s quite a lot to see.’
And as they sat and chatted while their cup of tea they drank,
he found he had a lot of things in common now with Frank.

Then as they wandered through the Shed and some men stopped to chat,
he took an interest in their work and thought, ‘I could do that.’
And no-one seemed to hurry, they all worked at their own pace,
yet the air of quiet endeavour brought a faint smile to his face.
The District Nurse returned at ten to take him home again
and though he left, his heart told him he’d much rather remain.
So when she dropped him at his gate he told her, with a smile,
‘Next time you take me to the Shed, I’d like to stay a while.’

by Bob Sanders, member of The Australian Bush Poets Society

The Raymond Terrace Men’s Shed works out of the old fire station.

Reg has dementia and goes to the Shed every Tuesday to help make things and generally have a chat. The next morning he asks if it’s Tuesday yet….I think that means he likes going.

The other Shedders have embraced Reg as one of their own and always ask after him if he’s away at respite.

The hobby horse in his right hand he made for his 3 year old grandson, the pride that comes from still being able to contribute. 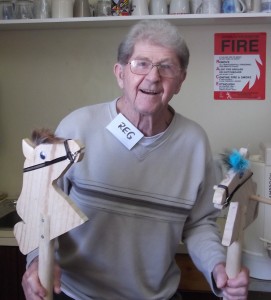