[Editors Note: Dr. Bill Thomas’ Age of Disruption Tour is the proud platinum sponsor of the 2016 National Village Gathering Oct. 17-19 in Columbus, Ohio. Join us at the conference for a special presentation of Disrupt Dementia and Life’s Most Dangerous Game.]

Around the country, the nonprofit Village model of neighbors helping neighbors has taken off. At last count, 205 Villages were open, with another 150 in development, in 46 states, all aimed at helping older adults remain in their own homes. But Villages often do not reflect the racial, ethnic, and socioeconomic diversity of their communities or of the nation. This matters, says Molly Singer, executive director of Capitol Hill Village (CHV). “This is a grassroots movement that is meant to serve the entire community.”

The Village movement is 93 percent white, a figure that’s held fairly steady over the last decade. This contrasts nationally with 79 percent of Americans 65 and older who are white; by 2050 the projected figure is 61 percent, according to a 2014 US Census report An Aging Nation. Studies also show that Villages tend to be in higher income areas.

“[Diversity] is something we really want to work on,” says Natalie Galucia, director of the Village to Village Network. She points to several factors that contribute to a lack of diversity. For one, Villages tend to be organized by retired people, and many lower-income older adults cannot afford to stop working.  “Communities that are higher income have more resources available to them,” she adds.  They may have access to pro bono lawyers to help with obtaining nonprofit status or to members with fund raising, organizational, and computer skills.

Villages that are making headway towards diversity stress that being intentional is key. “If you want to have diversity in your organization, you can’t have it as an afterthought,” says Pazit Aviv, Village Coordinator for Montgomery County, Maryland, which has 20 active Villages and another 10 in development. “It has to start from the leadership.”  For example the Village of Takoma Park (full disclosure:  I am a member) has achieved a high degree of diversity by reaching out to elders in high-minority apartment buildings. Of its 157 members, more than 25% are African- American.

Montgomery County is unusual in committing the resources towards Aviv’s position. “Government does have a role in doing this kind of work in collaboration with Villages,” says Aviv.  “It’s extremely difficult to create and sustain a village. Investing in additional manpower to address diversity issues is often beyond their capacity.”

Of course not every Village is located in a diverse area. Organizers of STL Village in St. Louis, the first in Missouri, made “an intentional decision to include neighborhoods that are primarily African-American and lower income in the footprint,” says executive director Madeline Franklin.”

“Where there is diversity, you have to decide if that is a core value,” says Franklin.  “Is it important to you?  If so, then be very intentional about making sure you reflect that in your literature, in your marketing materials and on your Board.”

In addition to Franklin, who is African-American, the board has two African-American members and one Latino. Like many Villages, STL has a sliding scale for membership, so that people of all incomes can join.  Of the Village’s 75 members, 7 are nonwhite, Franklin says, a number they hope to build on. 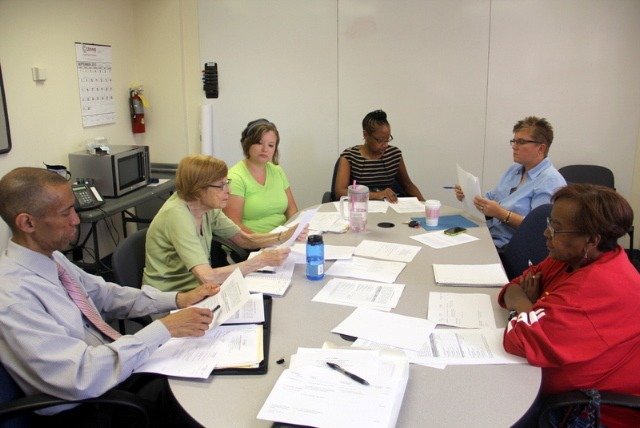 Franklin and other Village leaders say that diversity is rooted in trusting relationships. “There has to be a relationship that takes several months to develop—not just a one-shot deal,” says Franklin. “In a lot of communities they have had groups come to sell them on their program and then they never see them anymore. The result is zero.” STL Village is targeting one neighborhood at a time, to build those relationships. They also incorporate a mix of activities on the Village calendar, such as a recent trip to the Black Repertory Theater.

STL Village also learned the importance of simply listening to others, and not assume you know their needs. For example, STL Village proposed to a long-standing African American community group that they co-host a film and discussion event about health disparities.  But the idea fell flat—health disparities were old news. “We listened to them, and a major concern was a neighborhood park that was not being taken care of by the city,” says Franklin.  The Village collaborated with the group and with a local church, and the city soon responded by making park improvements.  “That gave us goodwill in the neighborhood,” she says.

In Washington DC, CHV, one of the largest Villages with 500 members, is slowly increasing its diversity, says Singer.  Capitol Hill is in a ward that is two-thirds African American, yet roughly 90 percent of CHV members are white.  During the last 6 months, though, 25 percent of new members are either African American or Latino.

Like St. Louis, CHV is targeting neighborhoods for outreach. It sends its newsblast to church bulletins, and it asks volunteers to focus efforts on coffee shops, community blogs and other informal networks in the targeted neighborhoods.

It holds many events at subsidized apartment complexes and at public libraries. “It’s super hard,” says Singer.  “You have to run around the track a lot of times to access the decision-makers and informal leaders in those communities to get their buy-in and to spread the word.”

In nearby Baltimore, Northwest Neighbors Connecting, initiated by CHAI (Comprehensive Housing Association, Inc.), encompasses a low-income area with a significant Latino, African-American and Jewish population.  According to director Chava Ball, roughly 20 percent of the Village is African-American, and more than half is Jewish. (They have no Latino members.)
“It’s been a process of inclusion and building relationships,” says Ball.  “Trust is being built.”  A core value of their Village is that “every activity has to be inclusive.”  For example, the organization will only serve Kosher food at its events. “Serving non-Kosher food excludes our Jewish members, but everyone can eat Kosher food,” says Ball. “That is inclusive.”
The Village also has an active subgroup called Diversity Dialogue.  A recent gathering drew 16 members, 5 of them African-American and the rest Jewish, including 2 Holocaust survivors, says Ball. “It is a safe place to talk, even if you don’t agree,” she says. ”We had quite an emotional dialogue during the riots” over the death of Freddie Gray while in police custody, for example.

NEXT Village San Francisco has a different diversity challenge—connecting with the pan-Asian community that makes up two-thirds of the area that the Village represents.  Half the members speak primarily Mandarin or Cantonese, and 70 percent have subsidized memberships, says director Jacqueline Zimmer Jones.

Most of the Village’s activities are attended by either its white members or its pan-Asian, rather than by both. “For the most part it falls along culture lines,” she says.  “It seems more important to me that people enjoy their time and be connected and engaged, rather than force them to go to an event where their language isn’t spoken.”

The Village received a small grant to hire a Mandarin/Cantonese-speaking contractor with a background in senior services to help with outreach and volunteer recruitment.  The Village’s written materials are also translated into Chinese.

Whatever the demographics, says Franklin, “The most important thing is being welcoming and recognizing and respecting differences.  When you’re dealing with people with differences in education and background, recognize that some will enjoy some activities and others won’t, but there’s room at the table for everyone.  And there’s a benefit for people on both sides.”

“You need to be patient and plant seeds and see what happens,” adds Aviv. “The question of diversity is nuanced and complex and that makes it much more difficult to develop. But I see a lot of movement.”