Texas is big. At 750 miles wide by 790 miles long, it is the second largest U.S. state behind Alaska—and larger than the 15 smallest states combined. Given its enormity, it may come as no surprise that the Lone Star State is also home to the largest number of natural disasters in the country. With hurricanes, floods, tornadoes, and wildfires, at least one major disaster is declared nearly every calendar year in Texas.

A group of enterprising disaster-relief experts in the state have come up with an idea to utilize the experience, skills, and ingenuity of elders to help resolve a conundrum that has plagued the state for years: the lack of housing for relief volunteers. The idea: recruit and utilize retiree RV owners to travel to a disaster site, with their RV, to help with relief efforts.

Why is this such a great idea? With disasters come volunteers—thousands and thousands of them. And in Texas, managing volunteers is a big job. The Retired Senior Volunteer Program (RSVP), which is one of the largest volunteer networks in the nation for people 55 and older, is a source of tremendous assistance during disasters in the state. However, its legions of elders are able to operate effectively in only about 40 percent of the state, leaving a gap of 60 percent of Texas that cannot be currently served by RSVP during and after a disaster. 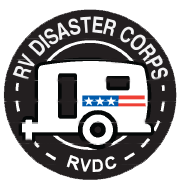 Enter the Recreational Vehicle Disaster Corps (RVDC)—an idea spawned by Susan Copeland and others to help fill in the gap left when volunteers arrive at a disaster site and cannot be housed. “The number one thing affected in a disaster is housing,” says Copeland, who is program director for the Heart of Texas Retired Seniors Volunteer Program. “Typically, volunteers have nowhere to stay during a disaster, so it limits our ability to help during some disasters because the volunteers couldn’t come in and go back to their homes in one day.”

If only volunteers had houses on their backs, Copeland and her colleagues thought one day as they were brainstorming ideas to fill the gap. “Then we realized that many seniors own recreational vehicles (RVs),” she says.

In fact, nearly 800,000 senior adults own RVs in this country, and so the idea for the RV Disaster Corps (RVDC) was born. “We thought that if we had volunteers that own RVs and were trained to go in and be a second wave of assistance to set up and help run centers, it would help solve the housing problem and also fill a vital need,” Copeland says.

Now in its infancy stage, the mission of RVDC is to utilize its roving volunteers to serve as secondary responders in times of disaster. Members are now being recruited from the thousands of 55-plus adults that own RVs.

Once recruited and trained, the volunteers will prepare to travel to disaster areas to staff reception centers and phone banks, register survivors for assistance, and assist in other ways for a period of one to two months after the disaster, Copeland explains. “The best part of it is that they won’t consume the already scarce local housing resources in the area.”

“We have a couple of RVers who have already committed,” Copeland says. She and her colleagues plan to promote the RVDC via RV clubs and advertising in relevant travel magazines, on websites, and on Facebook. “Eventually, we will have an app for folks to use,” she adds.