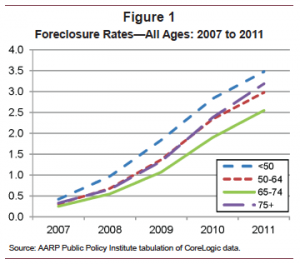 AARP reports that the mortgage crisis is increasingly hitting older adults — especially those 75-plus — and that Latino and African American elders and their families are the hardest hit of all Americans, according to a new study released today.

Between 2007 and 2011 about 1.5 million people over age 50 lost their homes to foreclosure and another 3.5 million aging boomers and older in the U.S.  “are at risk of losing their homes,” according to the report, “Nightmare on Main Street: Older Americans an the Mortgage Market Crisis.”

It remains true that those under age 50 are more likely to be in foreclosure, but the report found that the risk of “serious delinquency” on mortgages is growing at a much more rapid rate among those over age 50.

While the study classified even baby boomers as “older Americans,” its most dire findings were for the oldest group. Among people over 75, the foreclosure rate grew more than eightfold from 2007 to 2011, to 3 percent of that group of homeowners, the report found.

The report, conducted by Lori A. Trawinski of AARP’s Public Policy Institute, shows that Hispanic and black elders suffered “double the foreclosure rate” of older white borrowers. While Latinos and African Americans 50-plus with prime loans saw foreclosure rates of 3.9 percent and 3.5 percent, the level for whites was 1.9 percent in the five year height of the crisis.

“The biggest problem we found is for the oldest of the old, those age 75 or more,” said AARP director of policy Debra Whitman in a press briefing Wednesday, July 19.

“Older homeowners often rely on their home equity to finance their needs in retirement – things like health care, home maintenance and other unexpected needs.

Whitman said many of those eldest homeowners may have lost income, such as the retirement benefits of a deceased spouse, they were counting on for retirement. Older homeowners often rely on their home equity to finance other needs in retirement, such as health care and home maintenance, Whitman said.

“The fact that so many older Americans have no equity at all is troubling,” Whitman said.