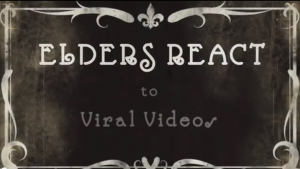 One of YouTube’s most popular channels, Fine Brothers Productions, has launched a new series “Elders React To Viral Videos” featuring a panel of sage older adults reacting to some of the weirdest and most popular viral videos on the internet.

Naturally, the elders come off a little silly watching some of the weirdest (but most viewed) videos on the internet. But overall I think the series is genius and I applaud the Fine Brothers for producing content that really bridges the generational divide.

There are two videos so far, below, which have both attracted millions of views. The series follows in the mold of the Fine Brother’s “Kids React” and “Teens React” series featuring kids and teens reacting to viral videos.

Here’s how it works – the viral videos are selected by the Brother’s Facebook fans and then shown to a panel of viewers (kids, teens or elders). Their reactions are videotaped and then they are questioned about the video. Hilarity ensues.

You have to see it to understand. If you have time to kill (hey, it’s the summer!), I encourage you to check out the Kids React version of the Nyan Cat video and Dubstep. There’s some hilarious congruity between the elders’ and the kids’ reaction to ridiculously inane videos that have nevertheless garnered hundreds of million views.