You are here: Home / ChangingAging / Disrupting the Stale Youth/Age Duality

Youth and Age in 21st Century America have been defined by a mythology that is both universally understood and rarely spoken of. Everywhere we look we can see evidence that our culture has somehow awarded Youth a monopoly on virtue. Similarly, we find ourselves surrounded by the disabling assumption that Age offers nothing but decline and loss.

Both narratives are deeply flawed and need a stiff dose of disruption.

The Question is How

How do we challenge an orthodoxy that is so entrenched and so powerful and which remains, for all practical purposes, invisible. We can start with what we know won’t work.

The truth is that the answer we seek lies at the heart of local communities. It is woven into the web of relationships, shared language and understandings, and, yes, the dreams that make up our daily lives. We have a new story to tell, a story that balances and blends Youth and Age in exciting new ways. This is a story about growth and the emergence of possibilities and it needs to be told— locally. The attempt to “disrupt aging” on a national scale must (strange as it might seem) must be rooted in local communities.

What I Learned on the Road

Before we launched the 2015 Age of Disruption Tour (which just wrapped up in Florida this month), all I had was a hunch. I believed that societies change the way people change, by fits and starts. Established habits and beliefs begin to lose their grip on us when we see and hear people acting and talking in new ways. The 2015 Tour was based on the idea that engaging people in conversation on their turf and on their terms could open up new possibilities and create new ways of thinking. I could help us do more “showing” and much less “telling.” 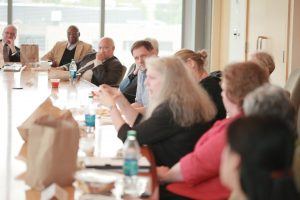 We used the concept of convivium (the special pleasure we get when we share good food in good company) to animate lunchtime conversations in all 30 cities. To the hundreds of people who shared “convivium” with us, I say, thank you! I learned much more from you than you learned from me.

During the afternoon we addressed the fact that ageism is deeply ingrained in our health care system. The Tour’s “Aging Reconsidered” workshop explored the ageist language, assumptions and behaviors that do so much damage to older people at precisely the moment they need the most help. In my view, doctors and nurses are doing the best they can. The problem is that, with only rare exceptions, they have spent little or no time examining the impact that ageism can have on their most vulnerable patients. We’ve tried to right that wrong. 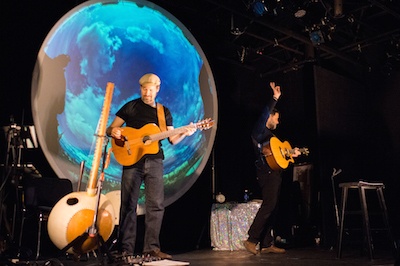 In the evening, the physician (me) and the musician (Nate Silas Richardson) took to the stage and showed audiences how they could play “Life’s Most Dangerous Game.” Blending neuroscience, mythology, music, psychology, biography and story-telling, this 80 minute “non-fiction theater” performance gave us a new way to connect with a wide range of people and bring a message rich in optimism and enthusiasm to local communities.

Our experience in 2015 validated our hypothesis– there really is a hunger for a healthy, nuanced exploration of the stale YOUTH/AGE duality. Not only are people hungry for new perspectives, they want to have some fun exploring these new ideas. We are onto something that works and we are dedicated to making the Age of Disruption Tour bigger and better in 2016.

Yes, You Read That Correctly

We will be back out on the road in 2016 and we will be looking for you! One of the things I want to focus on in 2016 is how we can do a better job connecting the Tour to our loyal readers. We are going to be asking you questions, trying out new ideas, showing you works in progress and working to ensure that your insights and opinions are reflected in the 2016 Age of Disruption World Tour. We are in this together and the time to Disrupt Aging is now.