Last month ChangingAging published the first in a series of original blog posts inspired by stories we discovered through Dr. Bill Thomas’ Age of Disruption Tour. This ongoing series will feature people and organizations who are effectively reframing the way their communities think about aging and arevgenuinely valuing elders as the glue that holds society together.

Our first Age of Disruption story The New Story of Aging — written by acclaimed journalist and author Beth Baker — also demonstrates the type of story that meets ChangingAging’s new editorial guidelines. These guidelines are inspired by the recommendations of the groundbreaking Frameworks Institute report “Reframing Aging” cited in Beth’s story.

Beth tells the story of Houston-based non-profit Sheltering Arms and their groundbreaking efforts to shift away from seeing elders as “needy” and instead empower them to achieve their goals and give back to the community. Sheltering Arms is a division of Neighborhood Centers, a sponsor of the Age of Disruption Tour.

Sheltering Arms’ experience is an example of the reframing of our cultural views of aging, a trend that is happening around the country. For decades, groups such as the Pioneer Network and Dr. Bill Thomas’s Eden Alternative argued that being old does not mean we stop growing.  Now that message is being fueled by major players in the field of aging. Eight leading organizations, among them AARP, the Gerontological Society and the American Society on Aging, have commissioned the nonprofit FrameWorks Institute to conduct ongoing research on how aging is perceived in the United States and how that perception might be transformed.

FrameWork’s effort is critical for a couple major reasons and, not coincidentally, is completely aligned with the mission of Dr. Thomas’ non-profit incubator, the Center for Growing and Becoming (best known for creating The Green House Project, ChangingAging.org and the Age of Disruption Tour).

Dr. Thomas has long argued through his projects, books and this blog, that ageism is the core challenge that needs to be overcome in order to effect deep cultural change, both within long term care and across society in general. We now have extensive research documenting this in the FrameWorks Institute’s 2015 report Gauging Aging as well as their emerging communications strategy to empower advocates to combat ageism.

As Baker reports in her blog post, “the authors identified key communications challenges that need to be overcome in order to effect deep cultural change.  These challenges include:

ChangingAging rejects submissions that perpetuate negative stereotypes about aging and violate the FrameWorks Institute’s recommendations for Reframing Aging. In particular, we will reject stories that:

Not a day goes by that we don’t receive a guest blog post submission that violates these standards. Sadly, the majority come from fellow advocates, friends and allies.

As FrameWorks points out, it is in fact aging advocates who are most responsible for perpetuating negative and declinist stereotypes of aging in a misguided effort to serve older adults. And the declinist approach is backfiring, as Beth reports:

Sheltering Arms had been a traditional social service provider for decades, explains director Jane Bavineau. But in recent years it struggled financially.  In hindsight, Bavineau says, “When we raised money and talked about our clients, we were supporting a message that said aging really sucks.” 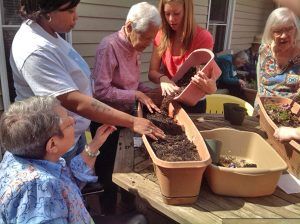 After merging with the nonprofit Neighborhood Center’s, Sheltering Arms underwent an exhaustive Appreciative Inquiry process to reorient the organization’s focus on their client’s strengths and interests. Beth’s story highlights the positive impact these changes have had on Sheltering Arms’ community.

Please enjoy the next story in our Age of Disruption series– Purposeful Community Living, by reporter Meg LaPorte, highlighting an innovative new model of long term care in Chapel Hill, N.C. — and continue sending us your guest blog submissions that champion the age of disruption.