You are here: Home / ChangingAging / A Week Changing Aging

Imagine my surprise when I discovered that the December issue of The Magazine from AARP named me as one of the most influential people in America over age 50 “Changing Our Views on Aging.” In particular, they focused on my role as the founder of The Eden Alternative. Pretty cool.

Since Jude is now feeling better, I was able to slip out of town and head down to beautiful Nashville, Tennessee. There I helped the Eden Alternative team launch a terrific new dementia training program that is being supported by a $370,000 grant from CMS. This is the largest grant in Eden’s history and it is going to make a real impact on Elders and Care-Partners in Tennessee.

From there I flew to Washington, D.C. I got up early the next morning and walked over to the National Press Club.

From there I walked down the street and visited with my friends at AARP. I am happy to announce that I will be helping AARP bring its “Life Re-Imagined” to the world. I love the concept of “Life Re-Imagined” because it reverses the common misunderstanding of aging as decline and gives us the prospect of exciting personal growth. Look for much more from me about this in 2013. Get a sneak peek here at Life Re-Imagined HERE.

From there I took the Acela to NYC. 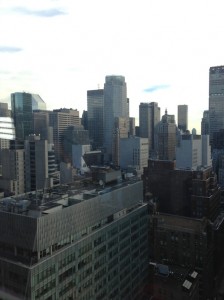 running on PBS in 2013. The film reveals the powerful impact that music can have in the lives of older people. We taped on the 21st floor of a building across from Bryant Park. At one point we had to stop recording because of what we thought at first was the sound of a bird singing. We all laughed when we realized that it was actually the whistle of a cop directing traffic 21 stories below us. Music baby!

See a clip from the upcoming film HERE.

After a quick lunch with the Alive Inside guys, I walked down the street to meet with Trish Todd. Trish is my editor at Simon and Schuster and I LOVE LOVE LOVE her. She is smart, she is passionate and she is real. We talked for about an hour about my new book (Title yet TBD) and after I left she kindly tweeted her reaction to the manuscript:

@drbillthomas Gorgeously written, full of new ideas, and lots of good stuff happening around it.What editor could ask for more?!

I took the bus home to Ithaca and savored a new book I am reading— “1493”. It describes “globalization’s” impact on people and the environment in the wake of the “discovery” of the Americas.

More about the book HERE

Overall, it was a pretty good week.