You are here: Home / Archives / Women Olympians as Role Models 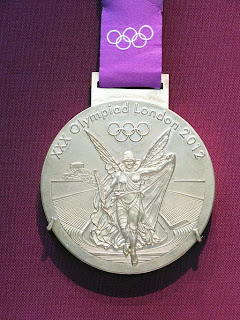 The
“Fierce Five” USA gymnasts are a close-knit group, supporting each
other through the Games – even when they are competing against one aother. Jordyn
Wieber, who had been best in world in all-around didn’t make the cut for the
Olympics all-around, yet congratulated teammates Aly Raisman and Gabby
Douglas who did. McKayla Maroney and Kyla Ross have been friends since they
were 8 and both took gymnastics at the same gym. When they all worked together
as a team, they drew strength from their friendship with each other and won the
gold medal in team gymnastics. You may not be reaching for the gold yourself, but the
commitment you and your own friends make to each other nurtures each of you and
creates emotional bonds that provide the foundation for a fulfilling life.

Persistence. Dana
Vollmer didn’t even make the Olympic women’s swimming team four years ago. But
she persevered and worked harder than ever to make the team this year. All her
practice paid off when she broke the world record, winning gold medals at the London Games in butterfly as well a gold in women’s medley relay, with Missy Franklin,
Allison Schmitt and Rebecca Soni. When you are discouraged and tempted to give up working toward your own goal, believe in yourself and find the strength to hang in there.
Loyalty. Missy Franklin
has been approached time and again to make endorsements but has turned
them all
down so could remain an amateur and swim for her high school and future
college
teams. With her bubbly personality, Missy enjoys her friends in school
and is
devoted to them, to her family and to her hometown coach. Winning 4 gold
medals
in backstroke and women’s team relay and a bronze in another team relay,
she is
looking forward to getting back home and hanging out with her friends. Your own sense of responsibility for your community and the
value you place on generativity and giving back will help you remain true to
your ideals.