You are here: Home / Archives / Why We (love to) Fight 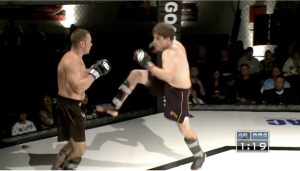 Notwithstanding my Dad’s recent post on Head-Butting Punks, I love a good fight. That is, a good sanctioned, clean and professional fight.

There was a time when Boxing was more American than baseball and apple pie, combined. Now, it seems, this slug fest of a sport has given way to a new breed of fighting — Mixed Martial Arts — known most famously through the UFC (Ultimate Fighting Championship).

My college roommate (seen above throwing a kick punch combo) is an aspiring MMA fighter and I attended his first amateur match in Pensilvania last weekend and saw first hand how much more popular MMA has become compared to boxing.

So why is boxing losing out? There are a number of internal problems the sport is facing, such as a lack of superstars and rash of ruthless promoters; but one of it’s biggest problems is the rising popularity of MMA.

There is a natural rise and fall to these kinds of sports. The Romans had the Collosium, the 19th Century had boxing, and the new millenium has MMA.

In many ways this is a generational issue.

“There’s no doubt about it. MMA has a younger demographic,” said Dana White of mmascraps.com. “Younger people are overwhelmingly more attracted to this new breed of fighting.”

It seems too that many people will be tired of the predictability of boxing, instead looking for something different, and finding MMA . . . Ask an MMA fan, and there are easily 10-15 fighters who can be considered the best in the world at any one time. From the BJ Penn’s, to Anderson Silva, GSP, Fedor, Brock Lesnar, Shogun Rua, there is no real answer”

Where boxing is a stand-up-strait-punch’em-in-the-face kind of sport, MMA has many more dimensions. There are kicks, knees, take-downs, submissions, “ground’n pound,” and good old striking. It is a pure evolution of fighting, mixing classic styles into the ultimate combination.

No fighter can be the best using only one martial art; boxing, Muay Thai, Jujitsu or wrestling. A boxer will win a striking match, but if he is taken down he’s out of his element. A wrestler will get kicked in the head if he does not have some kind of striking skill, and so on.

Speaking for myself, as a former competitive high school wrestler, I enjoy the complexity and the authenticity of the sport. While boxing is very gentlemanly (allowing the opponent 10 seconds to get up ), an MMA fighter is free to jump on his opponent as, perhaps, a person would in a real fight. The only rules are for the contenders’ safety, not to constrict the sport, like in other forms of fighting. Finally, the sport is youthful and energetic, with a healthy amount of up and comers, making each fight exciting.