You are here: Home / Archives / The New Old World

On the frontier of aging– in Japan.

USHI OKUSHIMA is the oldest resident of Ogimi, the most elderly community in Japan – the country where the average age is higher than anywhere else in the world. At 108, she still takes to the floor for traditional Japanese dances. Afterwards she dabs a little French perfume behind her ears and sips the local firewater. Okushima was born when Japan had only recently seen off the shogun warlords. If an ageing population is on the way, she is not a bad advert for what we have in store.

The land of the rising sun has become the land of the setting sun with staggering speed. As recently as 1984, Japan had the youngest population in the developed world, but by 2005 it had become the world’s most elderly country. Soon it will become the first country where most people are over 50 years old. 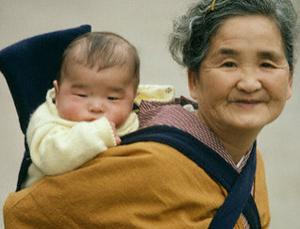 This is partly because Japanese people live longest: men can expect to reach 79 and women 86. It is also partly because the Japanese have almost given up having babies: the fertility rate is just 1.2 children per woman, far lower than the 2.1 needed to maintain a steady population. The rest of the world is following Japan’s example. In 19 countries, from Singapore to Iceland, people have a life expectancy of about 80 years. Of all the people in human history who ever reached the age of 65, half are alive now. Meanwhile, women around the world have half as many children as their mothers. And if Japan is the model, their daughters may have half as many as they do.

Homo sapiens is ageing fast, and the implications of this may overwhelm all other factors shaping the species over the coming decades – with more wrinklies than pimplies, more walking frames than bike stabilisers, more slippers and pipes than bootees and buggies, and more grey power than student power. The longevity revolution affects every country, every community and almost every household. It promises to restructure the economy, reshape the family, redefine politics and even rearrange the geopolitical order over the coming century.