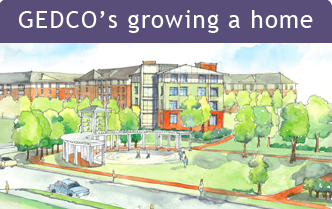 I shot a few videos Friday while attending the groundbreaking for Maryland’s first Green House Project residence at Stadium Place in Baltimore. Assembled for the ceremonial first shovel and cornerstone laying was an impressive array of Baltimore City elected officials, business and philanthropic leaders, including Mayor Stephanie Rawlings Blake, City Council President Jack Young and the state delegates representing Stadium Place. It was an impressive testament to the coalition of broad support GEDCO harnessed to bring The Green House Project to Baltimore.

Speaking at the event, GEDCO Executive Director Mitch Posner said the groundbreaking was a culmination of nearly two decades of effort, dating back to the building of its first retirement home in the 1980s at Epiphany House.

Sadly one of the first residents at Epiphany House had a stroke weeks after moving in and was forced to move to a nursing home. That prompted GEDCO to begin plans for a housing community in Baltimore City that would provide continuing care comparable to the many large Continuing Care Retirement Communities found in the suburbs of Baltimore. The goal was to provide homes that would “maximize the physical, social and spiritual potential of older adults through the holistic continuum of support services and housing.”

GEDCO was able to secure a donation of nursing home beds from Johns Hopkins Hospital, the first necessary hurdle to cross in order to build a nursing home. But as the organization began investigating nursing home options, they kept hearing about a radical new approach — The Green House Project.

In the video below, Mitch Posner explains how GEDCO’s board at first rejected The Green House model, before eventually embracing it. Also in the video, Dr. Bill Thomas, Green House Project founder, shares his always colorful view on the future of nursing homes in America.