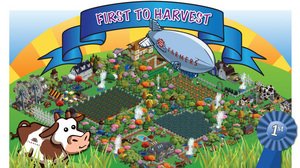 I was just listening to a story on NPR Morning Edition about advertising in online gaming that made me sick to my stomach.

An advertising executive for the insurance company Farmers Insurance Group described a marketing campaign designed for the popular Facebook game Farmville. The insurance company created a virtual Zeppelin balloon featuring its logo that Farmville users could download for free. If players downloaded the ad to their game, their reward was a brief respite from the virtual demands of farming.

Apparently, the demands are so rigorous and the game so addictive that one player exclaimed on her Facebook wall that she was so relieved to get a break from virtual farming because she could now spend a couple hours with her grandchildren without worrying her virtual crops would wither and die.

This is a social networking FAIL.

What shocked me the most was that Marc Zeitlin, the Farmers Insurance vice president who designed the ad and told the story, framed it as a positive outcome. Even after he openly admitted his personal addiction to the game Farmville was “very hard on marriage and other relationships.”

It’s no surprise that advertisers are finding a captive audience in the world of online social gaming, such as Facebook’s CityVille, FarmVille, Texas HoldEm Poker, Pet Society, Mafia Wars and Car Town. Hundreds of millions of people have become addicted to such games as anyone who uses Facebook either knows firsthand as a player or second-hand as an annoyed recipient of dozens of invitations to pitch-in at the virtual farm, city or mafia life.

ChangingAging has been an active champion of social networking and social media… but only in the context that these tools enhance social relationships, not diminish them.

Online social network gaming, and video games in general, are a clear example of the technology diminishing important social relationships rather than enhancing them.

Famed psychologist Philip Zimbardo has posited that boys in particular are suffering huge consequences from their immersion in the virtual world of gaming, pointing to the drastic decline in college graduation rates among men. Research points to the loss of socialization and instant gratification of gaming as the culprit. Zimbardo touches on this topic in this incredible video, which I’ve been looking for an excuse to share: